St Kilda coach Brett Ratten has laughed at the suggestion from Brisbane Lions counterpart Chris Fagan that the Saints may enjoy home ground advantage when the teams meet at the Gabba on Sunday afternoon.

However, Ratten made it clear the home ground advantage lay with the team that trained at the Gabba every week. 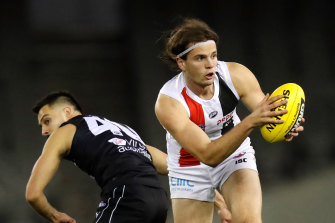 "We have had a little sample size of it so there is no doubt they get an advantage from playing at home," Ratten said.

Only a game separates the two teams, with the Lions second and St Kilda fifth on the ladder, and both will take settled line-ups into the clash, with St Kilda choosing to rest impressive defender Hunter Clark and drop Jack Lonie to make way for Dean Kent and Jake Carlisle to return.

The Saints' Ben Paton will play after being concussed during last week's win over Essendon.

Ratten said he was yet to determine whether they would use Seb Ross in a run with role with Lions playmakers Lachie Neale and Dayne Zorko both potential targets for the experienced Saint.

Meanwhile, Geelong made five changes for the clash with the winless Crows with Luke Dahlhaus returning for his first match since round seven while Esava Ratugolea, Brad Close, Jordan Clark and Jack Steven were also included.

Adelaide defender Jordan Butts will enjoy a baptism of fire in his first match in defence, with the Crows losing experienced defender Daniel Talia to injury. Andrew McPherson is also injured while the experienced Paul Seedsman was dropped as was youngster Fischer McAsey.

Darcy Fogary was given another chance up forward in Taylor Walker's 200th game and Chayce Jones and Ben Crocker come into the side.

Greater Western Sydney did not muck around after their below par performance against Sydney with five players being dropped and Tom Hutchesson injured.

Jeremy Finlayson was dropped for the Sir Doug Nicholls round despite being the only Giant to kick a goal in every game in 2020, and ruckman Sam Jacobs was dropped again. The axe also fell on young players Lachlan Ash, Xavier O'Halloran and Zac Langdon.

Coach Leon Cameron turned to Shane Mumford to take on the Eagles' Nic Naitanui while the match winner Toby Greene makes a much needed return. Adam Kennedy is back for his first game since round one with Daniel Lloyd returning. They also included Bobby Hill and Jake Riccardi – who is making his debut – to create some forward pressure.

The Eagles lost premiership midfielder Jack Redden but regained a premiership defender with Liam Duggan back in the side. Xavier O'Neill replaced Brayden Ainsworth, who was dropped.