Mitchell’s season may be over, but the suspended fullback is playing a crucial role – that of the opposing fullback – in his side’s preparations. As the Rabbitohs prepare for their fourth consecutive preliminary final, Mitchell has been mimicking Trobojevic’s movements to help his side counter the hot favourite for the Dally M medal. 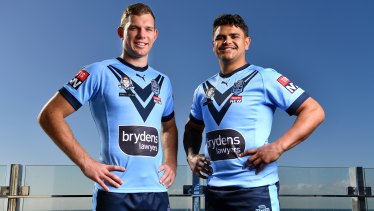 Tom Trbojevic and Latrell Mitchell played together for NSW – now the Mitchell is plotting a way to stop his Blues teammate.Credit:NRL Photos

“He’s been really good for us,” star forward Cameron Murray said of Mitchell. “I guess the silver lining of the situation we’re in with Latrell is that he can slot in there in reserves and pretty accurately act as a Tommy Turbo for us as we prepare to come up against him and Manly.

“He’s been really good for us over the last couple of days, he’s been having a lot of fun out there.

“He’s made sure we’ve put in a lot of really good practice. He’s a pretty handy player, he’s similar to Turbo out there.

“We’ve had some really good practice there and hopefully it will show.”

Blake Taaffe has slotted capably into Mitchell’s No.1 jersey, surviving an air raid from Panthers halfback Nathan Cleary in week one of the finals. After spilling the first high ball that came his way, Taaffe – who is more comfortable at halfback – defused every bomb thereafter.

Since his suspension, Mitchell has helped mentor Taaffe, particularly when it comes to the youngster’s positional play. Asked about players mirroring Trbojevic’s shapes at training, hooker Damien Cook said: “We’ve got a young fullback here who is not too bad, with a bit of free time on his hands; Latrell.

“He’s been quite a handful at training. That’s what we want. This is where the other players in the squad become so important.

“They have been all year, but the standard they set for us at training, the likes of Latrell, are really testing us. This will only make us better on the weekend.” 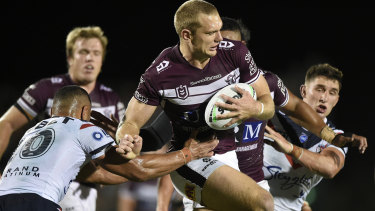 Tom Trbojevic scored a double in Manly’s big win over the Roosters in the semi-finals.Credit:Getty

Cody Walker, shortlisted alongside Trbojevic as a Dally M favourite, was asked how to stop the Sea Eagles fullback.

“I don’t know,” Walker replied. “He’s had an outstanding year this year. Not many teams have been successful. I don’t think you can stop him, you’ve just got to limit him with that possession game.

“You’ve just got to convert at their end as much as possible, not give them any leg ups out of yardage, have high completions. Have a full line whenever you put in a kick-chase down there, not a staggered line.

“If you don’t give him too many opportunities in our end, hopefully you don’t see him. It’s easier said than done.”

Murray said he was proud of the way Taaffe has acquitted himself in Mitchell’s absence.

“He’s done a great job,” Murray said. “We had every confidence that he would do the job he could do last week. He stepped up to the plate under pressure and executed everything he needed to do at the back there.

“We’re really proud of the way he has stepped up into the position he’s been given.

“It was a good game for him, there were probably a lot of nerves there, but it was good to get the win there. It probably does a lot for his confidence leading into another big game.”

The challenge now for coach Wayne Bennett is to get his side to take the next step after it stumbled in the past three preliminary finals.

“Sometimes it’s better not to make the finals at all, that’s how hard it hurts,” Cook said.

“Wayne talks about the deeper you go in, the harder it is to miss out.”

Paul Grayson column: Big test at last for England, even bigger one for Lawrence