When word filtered through this week that Australia-raised Guy Porter was poised to make his Test debut for England against the Wallabies, a Sydney University rugby group chat lit up.

In the group chat were current Wallabies and Sydney University representatives Angus Bell and Jake Gordon, plus Porter; England’s new No.13 for the second Test at Suncorp Stadium.

“Watch out for Belly running over you,” someone in the chat, who shall remain anonymous, fired off in a message to Porter.

It has been difficult for the Students’ faithful to comprehend how Porter, the former Scots College student and Sydney University Shute Shield-winning captain, ended up pledging his allegiance to England.

Porter was born in Kensington in the UK and moved to Australia at the age of seven, with a dream of playing for the Wallabies.

“Guy is the type of bloke who is destined for big things wherever he applies himself,” says Harry Johnson-Holmes, the one-Test Wallaby who sang plenty of team songs with Porter in the change rooms at Sydney Uni. 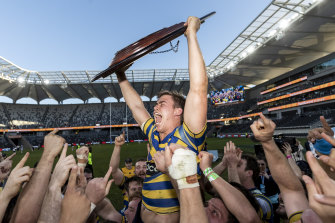 “He’s mounted a pretty impressive resumé so far, whether it be his quests through academia or his uncanny ability to produce premierships.

“If he wasn’t starting at No.13 for England, he would’ve been the first man on Mars or something like that. Don’t tell him I said that.”

Australian rugby fans reading Porter’s surname on England’s team sheet could be forgiven for wanting someone to blame.

How on earth did a bloke who moved to Australia as a kid, played the majority of his rugby here, went to an elite rugby school with the likes of Angus Crichton and Jack Maddocks and lifted the Shute Shield a couple of times, end up being courted by former Wallabies coach Eddie Jones for the Old Enemy before playing Australia on Saturday? 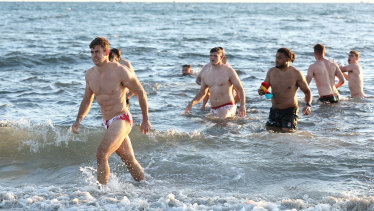 Guy Porter (left) walks from the ocean in Perth after an England recovery session before the first Test.Credit:Getty

Taylor isn’t to blame, but he laughs when asked if he feels somewhat responsible. It was Taylor who convinced Porter to leave the Brumbies in 2020 and follow him to Leicester in the UK.

“I guess there’s a part to play,” Taylor tells the Herald. “There were certainly plenty of opportunities for Australian teams to pick him up. He’s grown immensely over the last couple of years playing in the Premiership. It’s just unfortunate Eddie has come and tapped the shoulder first. Guy had some way to go, but the potential was definitely there, particularly when he was at Sydney Uni.

“I don’t think he ever set out to play for England when he left Australia. It was an opportunity to become a professional and maybe return to Australia as a better player and play for the Wallabies in that pathway.

“I think he’d be quite taken aback by how quickly it’s happened. Guy was a proud Australian as well as proud of his English heritage.”

When Porter runs onto Suncorp Stadium and sings God Save the Queen – he did so in Perth but didn’t get off the bench – an equal mix of cheers and boos is expected from the Sydney University rugby cohort making the trip north or watching on television.

Deep down, they’re proud to have watched, from afar, the 25-year-old blossom in the northern hemisphere.

“Sydney University people will be supporting the Wallabies through and through and hoping Guy plays a good game, but probably in a losing side,” Taylor says. “They’ll be cheering on a good performance for him.”

In April 2020, Carter picked Porter in his greatest ever Sydney Uni team of players during his era.

“I think he’ll end up being a Wallaby and a very good one at that,” Carter wrote on Rugby News.

A lot can change in two years.

“He has a special place in my heart,” Carter says. “He’s the quintessential Uni bloke. He was a great athlete. We were in a hole in 2014. We were keen to get Guy involved in the club and the program. A pretty incredible guy and incredible person.

“Really happy for him. He found his groove over there. It’s bittersweet. We’d love him to be here playing but he’s chosen to play for England. You wish him well. The Sydney Uni guys will be going nuts.”

Porter featured in 21 Premiership matches for Leicester this season and fluctuated between No.12, No.13, as well a few stints on the wing. His rise has been rapid.

It doesn’t get much bigger than a debut in Australia, at Suncorp Stadium, against a Wallabies side – with a handful of Sydney Uni players – desperate to clinch a series victory.

“Porter plays with a lot of punch, he takes the line on and he gets between defenders well,” Jones said this week.

The “one that got away narrative” often comes up when an Australian makes their mark abroad and takes an opportunity elsewhere.

Sometimes, Australian rugby is to blame, but would Porter have cracked the Wallabies given how many talented midfielders Australia is producing?

Porter is made of the right stuff. Teammates speak of the time when, just after coming back from a bad shoulder injury, Porter suffered a season-ending ankle injury.

He swore off the drink and rehabilitated like no one had seen for 12 weeks.

“That’s pretty hard for a student when a lot of your mates are [drinking],” Taylor says. “That set a tone for him and some of the younger guys.”

As Porter prepares for the biggest game of his life, we’ll let Johnson-Holmes, one of the game’s great characters, have the final word.

“No matter what gets thrown at him, he always seems to have an answer, which is annoying as his mate because it makes him a tricky target when you’re trying to get stuck into him,” Johnson-Holmes says.

“As a teammate, you know that it doesn’t matter if it’s a full house at Twickenham, or Sydney Uni Oval No.2 at 3pm on a Saturday, Guy Porter is going to give you something special, no matter what’s in front of him.

“Guy, my only ask is that when you do your acceptance speech for your first Test cap, please don’t put on that English accent that you’ve been working on. Be proud of your Aussie roots. Love you mate.”

Watch every match of the July Test Series on the Home of Rugby, Stan Sport. Kicks off this weekend with Wallabies v England (Saturday 7:15pm AEST), All Blacks v Ireland (Saturday 4:30pm AEST), South Africa v Wales (Sunday 12:55am AEST) and Argentina v Scotland (Sunday 5:05am AEST). All streaming ad-free, live and on demand only on Stan Sport.