Collingwood defender Jeremy Howe will miss the Magpies’ game against Brisbane this week because his wife is due to give birth.

Amid uncertainty over border closures, Howe will not travel with the team to Queensland, so he can be at home with his wife for the baby’s impending birth.

Howe will come back in to play the last round match against Essendon. 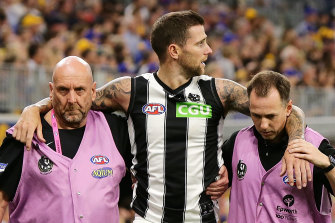 Jeremy Howe will miss Collingwood’s clash with Brisbane to stay home with his wife, who is heavily pregnant.Credit:Getty Images

The high-flying defender had only just returned to the side in the last fortnight after missing 14 rounds due to a hamstring injury that resulted in surgery.

Howe also missed most of last season also after injuring his knee in round four against the Giants. After so long out of the team the Magpies and the defender had been eager for him to get back in to play a few games at the end of the season, notwithstanding the fact the team cannot make the finals.

Howe returned from his most recent injury layoff and had an immediate effect, playing well in the big win against the Eagles and then doing well in the loss to Hawthorn.

Collingwood are poised to play another debutant before the season ends with Reef McInnes very close to selection for this week after starring at the reserve grade match at the weekend.

The fast inside midfielder, who was taken as a next generation academy selection in the first round in last year’s draft, missed most of the season with injury but has been back playing in the reserves matches in recent weeks.

Mid-season recruit, forward Ash Johnson, who had finger surgery shortly after joining the club, is likely to be back to play in reserves scratch matches in the next fortnight.

Fellow mid-season draftee, 18-year-old Aiden Begg, a tall forward who arrived at the club after having shoulder reconstruction that was likely to have him miss the remainder of the 2021 season, is a chance to play in the reserves matches in the next fortnight.