Melbourne Storm fought off the competition to re-sign half-back Jahrome Hughes at the start of 2021 and the New Zealand international repaid them, winning the Storm’s player of the year award on Friday night.

Hughes beat out forward Brandon Smith, who has had a controversial off-season, earning headlines for his behaviour post-season and for his comments while visiting other clubs before deciding to move to Sydney Roosters from 2022. 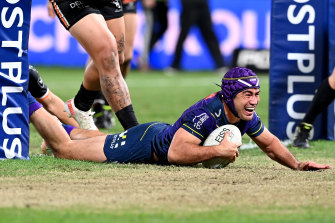 It was Hughes’ first taste of the award, which the likes of Cameron Smith and Jesse Bromich have dominated over the years. The 27-year-old took less money to stay in Melbourne instead of moving to the New Zealand Warriors at the start of this year and the award shows why the Storm made him a priority.

It adds another chapter to a fairytale rise for the former full-back, who came to Melbourne on a one-year deal in 2017 after injuries had left him on the fringes of the NRL. He quickly rose to become a valuable utility and then the team’s half-back, mixing his ability to pass and run with elite tackling skills from his time at full-back.

Hughes was in the top 10 in the NRL for try assists with 19, line breaks with 20, and he equalled his best try-scoring tally with nine tries.

Hughes took the award in the final round of the season earning three votes to beat out forward Brandon Smith, 27 votes to 23, with Christian Welch (20), Dale Finucane (19) and Ryan Papenhuyzen (17) filling the top five.

Hughes also claimed the members’ player of the year award while Smith won the best forward of the year and Papenhuyzen won best back of the year. 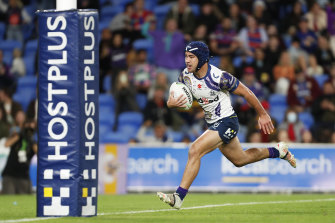 Jahrome Hughes scores a try on the Gold Coast during round 18. Credit:Getty Images

The Storm hosted an awards night with around 400 people at the Glasshouse, with the club also saying goodbye to Dale Finucane, Josh Addo-Carr, Brenko Lee and Hynes, who have left to join other NRL sides.