Home » Rugby » ‘I can’t wait to get stuck in’: McKellar to join Wallabies as forwards coach

Brumbies coach Dan McKellar will take the reins as Wallabies forwards coach at the end of Super Rugby Trans-Tasman.

McKellar, who led the Brumbies to the 2020 Super Rugby AU title but lost to the Reds in this season’s decider, will return to Canberra at the end of the Test season to resume his role as ACT’s head coach in 2022. 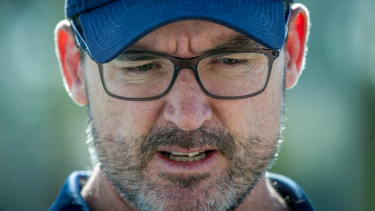 His contract expires in Canberra at the end of next season. McKellar may then move into the Wallabies role on a permanent basis before the 2023 Rugby World Cup.

“I’m really excited to join the Wallabies coaching group and work alongside Dave [Rennie, head coach]. I’m a really proud Australian and I want nothing more than to see the Wallabies to do well,” McKellar said.

“We have a really exciting group of players at the moment and there’s more talent coming through as well that will only continue to push the wider squad to get better.

“I’ve learnt a lot about the game, and myself, as coach of the Brumbies and I believe this is the natural step in my progression and development.

“I want to thank Phil Thomson and the Brumbies for allowing me this opportunity and the Wallabies group for being so welcoming already. I can’t wait to get stuck in after finishing on a high in Super Rugby Trans-Tasman.”

McKellar was set to join Dave Rennie’s staff last year but opted to stay at the Brumbies when his assistant, Peter Hewat, left to take a job in Japan’s Top League.

Geoff Parling was rushed into the Wallabies role last season but he was not viewed by Rennie and Rugby Australia as the right man for the job in the long term.

At the time, Rennie expressed his disappointment that McKellar would not join his staff. But nine months on, he has landed his man.

“In the end he has had to make a decision,” Rennie said at the time. “My thinking with Dan is that I was looking for someone beyond my time and Dan has the ability to coach the Wallabies, so the thinking was to get him into the team and have him ready to go post the [2023] World Cup. But obviously that is not going to happen the way I planned it.”

Rennie has been a vocal supporter of McKellar and believes he is the right man to guide his forward pack into the 2023 World Cup.

“Dan has enjoyed some great success in Canberra with the Brumbies over the last few years and has grown as a communicator and a leader,” Rennie said.

“I’ve been really impressed throughout my dealings with Dan and look forward to working alongside him with the rest of the Wallabies coaching group this year.”

Abdo to summon Radley for ‘please explain’ over lewd gesture