Home » Rugby » ‘I had a bit of bias against them’: Why Latrell Mitchell benched Blues

Latrell Mitchell had no interest representing NSW following his sensational axing after Origin I last year, but a recent phone call from Brad Fittler re-ignited the representative fire in his belly.

As the Blues prepared to kick off their latest Origin campaign against Queensland in Adelaide, Mitchell offered a rare insight into his 2021 plans – which include a Souths premiership and return to the NSW side. 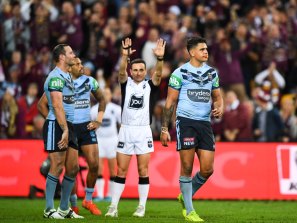 You’re off: Latrell Mitchell is sent to the sin bin in last year’s first game.Credit:NRL Photos

"If I played that next game [Origin II] I'm telling you I wouldn't have been the same [as that first game]. But it's cut-throat and if you don't perform, see you later. I understand I didn't perform.

"The first step is getting back on the field and playing for Souths. Then it's about getting back into that [NSW] jersey and having a crack again.

"Playing for Australia is the 'Mickey', I love it, that's the pinnacle for me, but the competitiveness for me, it's Origin and when you're playing Queensland and giving it to them.'' 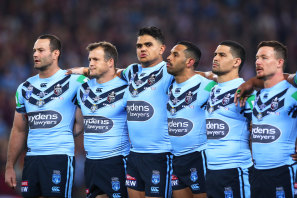 Latrell Mitchell opens up on why he does not relate to Advance Australia Fair on the Bloke In A Bar podcast.Credit:Getty

Mitchell also spoke about his love of South Sydney and Wayne Bennett, his real issue with the national anthem, how he went pig shooting in Townsville while meeting the North Queensland Cowboys, and why he did not want the pressure of being the $1m-plus marquee man at the Wests Tigers.

Mitchell said his refusal to sing Advance Australia Fair along with the other Indigenous Blues before that first game meant he put even more external pressure on himself.

He said the words ''girt by sea'' remained one of the major sticking points because it acknowledged the European settlers rather than the people already occupying the land.

"If you're going to say nobody was here when you discovered it, then where were we?'' Mitchell asked.

The 23-year-old, who is aiming to extend his deal at Redfern, spoke in detail for the first time about his meeting with the Cowboys – something that was arranged as he was en route to Cairns for a holiday – and his Taree coffee date with Tigers coach Michael Maguire.

While he was tempted by the country lifestyle the Cowboys offered, Mitchell said the Tigers tabled a deal worth north of $1m a season.

"It was big money – we're talking big money – but I said to myself, 'If I go there, will I be happy and the player I want to be?','' Mitchell said.

"People will see I'm on over $1m … I didn't need that pressure yet, with the money side [of things]. I thought, 'Souths are keen, I'll take a pay cut and go and play with them, challenge myself and play with some elite players'.

"The Tigers had Benji [Marshall] and good players. But they didn't have the foundation. They played good this year and it was grouse to see.

"But they didn't have your Cody Walkers and Adam Reynolds, boys who have played together for years – the three players in the spine (along with Damien Cook) have played for four or five years already.

"Benji was in and out [of the halves], Luke Brooks was in and out, they [the Tigers] just couldn't find that balance. I was like, 'I can't go there yet'. If there was an opportunity later on, maybe.

"But where I am at now I'm happy. People either go for Souths or it's their second team.''

Bamboozled Blues call for clarity on holding the ball rule