The first person Tyrell Sloan rang after learning he would be making his NRL debut was his grandmother Colleen.

“She is my rock. She raised me ever since I was two months old,” Tyrell said. 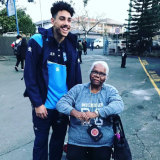 “I just leave [my parents] alone and try to do it for my Nan and my brother.”

Some St George Illawarra fans feel aggrieved after Matt Dufty was informed he isn’t part of the club’s plans moving forward. They will get their first look at the succession strategy when Sloan makes his anticipated NRL debut at fullback against Canberra on Saturday.

It has not been an easy journey. The 19-year-old has grown up without his parents, Colleen taking their roles with some assistance from big brother Ashley. They will be at the forefront of his thoughts when he fulfils a lifelong dream at WIN Stadium on Saturday . Sloan sees it as a chance to honour them and provide inspiration to other Indigenous youngsters emerging from challenging childhoods.

“Growing up, my dad was 16 when he and my mum had me,” Sloan told the Herald. ”Just young and dumb, they were involved with drugs and stuff.

“Dad just went back in [to jail]. I just let them do their thing, they had their chance to be around me if they wanted to. I just leave them alone and try to do it for my Nan and my brother.

“Me, I’ve never had a sip of alcohol or drugs because I’ve seen what it does to people in my circle, those who have been around me.

“That’s one of the reasons why I don’t do any of that. I want to be a role model for the next generation, for the younger kids coming through.

“I’ve only turned 19. I’ve learnt to grow up a lot quicker than most other people my age because I’ve seen a lot of stuff that a lot of kids haven’t seen.

“Me not having those silver spoons that some kids do have – not that it’s any problem – but it’s the way I’ve been raised.

“Even with my [four] little brothers or sisters, whenever it is pay week I always take them out and make sure they’re sweet with everything like school clothes and that. 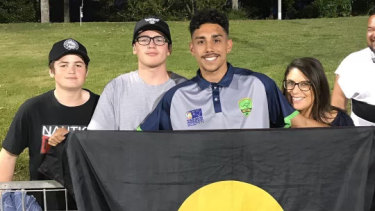 “I just want to get them out of that environment because I was raised in Koonawarra, which is in Dapto. It’s not the best place, I guess, for people to make it out of.

“If I can get them out of that environment and support them, be that older brother, that father figure or strong Indigenous person that I never had, I always try to give back.”

Dragons officials have had their eye on Sloan for some time. The Dapto Canaries junior was part of the 2019 SG Ball premiership-winning team alongside current Dragons Jayden Sullivan and best mate Talatau Junior Amone.

Sloan will be given time to grow into his new role in every sense. His quest to bulk up beyond his current 84-kilogram frame was hindered by a broken jaw suffered early in the year, preventing him from eating solids for several weeks.

“They put some pins in me because it was my chin and my jaw, I broke it in two places,” he said.

Larger obstacles have been overcome to make him the man and player he is now. Watch Sloan’s highlights video on Youtube and it’s clear why there are already comparisons with Sharks great David Peachey.

“I’ve never watched any of his games, I was too young, but I watched his highlights lately,” he said. “I do see a bit of resemblance, but I’m nowhere near as good as him.

“I love the way he plays; that long, lanky Aboriginal boy. I think that’s why there are comparisons.”

Sloan’s nickname, however, comes from his admiration of, and friendship with, Josh Addo-Carr. Sloan met the Storm star at a Koori knockout carnival and the pair have kept in touch.

“He’s always been open arms, helping me out,” Sloan said. “The boys are calling me ‘Foxy’ in training.”

Like Peachey and Addo-Carr, Sloan hopes that he too can one day be an inspiration to Indigenous youth.

“I’m a Wiradjuri boy, the family is from out west, Condobolin way,” he said.

“I want to make a name; my last name is not one of the best names about good things happening. I just want to break that cycle and be a role model for the next generation coming up.”

Could the Saints roll the dice on Hannebery?