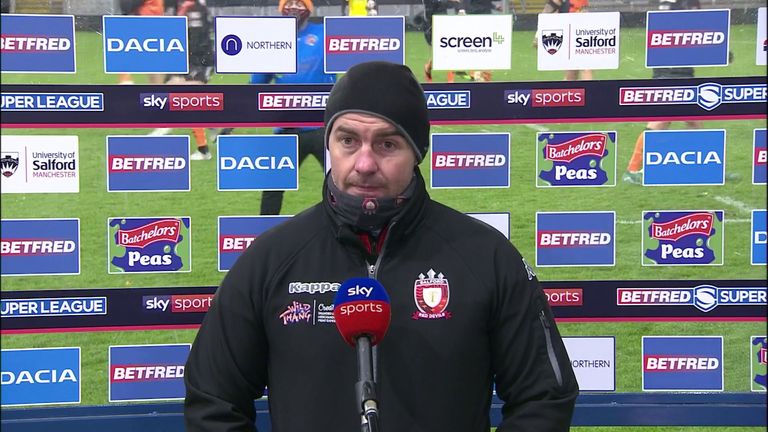 Salford coach Ian Watson has confirmed his commitment to the Red Devils after rejecting an approach from Super League rivals Hull.

Speaking after watching his side snatch a 12-10 victory to condemn reigning Super League champions St Helens to their first league defeat since March, Watson confirmed he had spoken to the Black and Whites chairman Adam Pearson about his club’s coaching vacancy but says he will be honouring his contract with Salford.

“Hull came forward and I can’t speak highly enough of them,” he said. “They’ve been really professional and did everything the right way.

“They contacted the club asking if they could have permission to speak to me and the club gave them permission.

“I spoke to Adam who talked about what was important to him and his family at Hull and the Hull club and making sure they were right going forward.

“My concern are my players at Salford and, with the timing and the circumstances and everything else that’s going on with Covid – my girls are in the final year of their A-levels and GCSEs – it’s probably not right for us at the moment.

“I’m flattered to be considered to be honest. As you go forward, you never know. I want to challenge myself and see how far I can go. “I’d love to go and coach in the NRL one day but there’s a process to go through to get there and I’m still enjoying what I’m doing here.”

Watson, who in the last 12 months has guided the unfancied Red Devils to a maiden Grand Final and a first Challenge Cup final for 51 years, is contracted to the club until the end of 2022.

After losing to Leeds at Wembley and conceding 58 points to Wigan last Friday, Watson’s men returned to winning ways in dramatic fashion against an understrength St Helens at Headingley.