Even for Wayne Bennett, it was a downright weird thing to say.

After all the misfortune Cameron Murray has endured since last November’s State of Origin series, from torn hamstring to troublesome ankle, the last thing he needed was his coach twisting the knife the night before selection for Origin I. 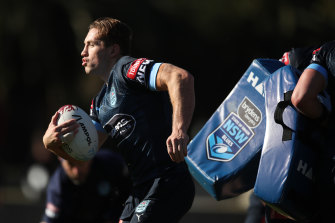 “I’d come to peace with the fact that I was going to be suspended, because it was out of my control. With the current crackdown, with a few non-negotiables in the rules with high tackles and crushers in the spotlight of late, I was nervous that I wasn’t going to play.”

The match review committee didn’t agree with Bennett, allowing Murray to take his place in the Blues side for the opening match of the series against Queensland in Townsville on Wednesday night.

Few were more relieved than Fittler and Bennett’s remarks later in that media conference, which didn’t receive wide coverage, explain why.

“Well, Cam Murray is always good,” he oozed. “I haven’t seen him play a bad game since he’s been with us. If everybody in the game had his attitude playing football, then you wouldn’t have bad teams and bad games.”

It’s hard to recall a time that Bennett spoke so glowingly about a player.

“I hadn’t heard those,” Murray says when the Herald reads the remarks to him. “That’s a pretty good rap, especially coming from him because he doesn’t throw them around lightly. I just don’t like letting people down.”

Indeed, Murray is the player every coach wants to pick and every player wants to play alongside. He’s not the player checking his Supercoach points as soon as he walks into the dressing-room or joking and laughing with the opposition on the field after a 20-point defeat.

“I’d let him date my daughter,” muses one NRL chief executive. “I wouldn’t say that about many players.”

Squeaky clean off the field, always on time, meticulous in his preparation and bankable every time he takes the field, Murray is critical to NSW’s chances in front of a hostile crowd. 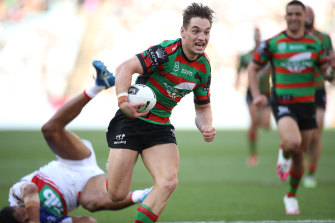 In so many ways, he’s the prototype of the perfect back-rower for the modern-game: agile frame, big motor, footwork at the line, a neat pass, lightning-fast play-the-ball and technically faultless in defence, save for the occasional entanglement of bodies that can look like a crusher tackle.

When he was growing up, his father, Corey, who played 12 matches for the Rabbitohs in the early 1990s, drilled him on the importance of tackling technique.

“He put a lot of emphasis on footwork, how you stepped into contact, just so I didn’t get hurt against bigger players,” Murray says.

That tutelage has been a blessing in the last few years as Murray spends most of his time rumbling in the middle of the park against bigger bodies. He has been picked on an edge for the Blues but will move into the middle at some stage.

‘When Wayne says he’s never seen me have a bad game, I guess it’s around my attitude and my intent.’

Murray laughs when you ask him to confirm his often-reported weight of 90 kilograms.

“I’m 95kg,” he says. “The information on the Souths website is a little dated. I’ve put on some kegs since I debuted. For the majority of my career playing first grade, I’ve been worried about my weight and the impact I have with such a small frame in the middle. But I’ve found a role there to play. I really found my niche there, and I’ve been trying to build off that. When Wayne says he’s never seen me have a bad game, I guess it’s around my attitude and my intent. There’s a lot of honour and privilege pulling on the red and green jersey.”

And the sky blue of his state. He’s determined to make up for lost time after suffering a serious hamstring injury in game one at Adelaide Oval last year.

Murray had come on for concussed captain Boyd Cordner but after less than five minutes was twisted in a tackle like he was made of plasticine, essentially headbutting his own shin as Maroons defenders piled on top of him. 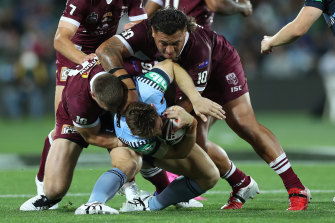 “I remember looking over going, ‘Ohhhhh’,” he recalls. “The body is not made to bend that way.”

The tear was similar to that of Murray’s Souths teammate, Latrell Mitchell, earlier in the year, although it didn’t require surgery as Mitchell’s did.

Murray has refused to watch any video of the incident.

“It wasn’t how I wanted my State of Origin series last year to go. I was in shock when it first happened – but it wasn’t overly painful. Honestly, the pain of going off and watching from the bench was worse. As I said, I don’t like letting anyone down.”

‘I am confused’: Sam Burgess to appeal after found guilty of intimidating father-in-law