It’s the ugliest tackle of the year and will sideline Liam Knight for the remainder of this season and a fair chunk of the following one, but the Rabbitohs forward bears no grudges against the culprit.

“I saw the tackle, it wasn’t the best tackle obviously,” Knight told the Herald. “He was a bit lost, the poor guy was coming from the wing into the middle of the field. He was a bit lost with what to do with the legs, he’s probably used to making one-on-one tackles out on the wing.

“I’m pretty pissed off with my injury, but I’m not angry at anyone. It was a shit tackle, it is what it is.

“He gave me a ‘sorry’ on the field, I don’t know if he’s reached out to me [beyond that]. I haven’t checked, I’ve been a bit occupied the last few days chasing up what I need to do next.”

What happens next is surgery on a knee that has suffered ACL and medial ligament damage. The incident occurred in last weekend’s NSW Cup game against Parramatta, when Eels winger Solomone Naiduki executed a cannonball tackle. Knight was unsighted as the Eels winger, who can escape with just a two-week suspension, speared into his legs.

“It’s pretty frustrating, pretty disappointing,” Knight said. “I can’t do much about it now, I’ve got to rehab it and get my surgery sorted.” 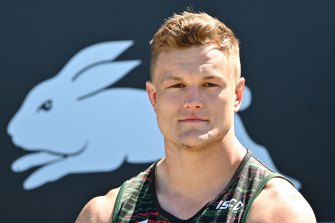 Liam Knight requires surgery on a knee that has suffered ACL and medial ligament damage.Credit:NRL Photos

Asked if he harboured any resentment, Knight insisted: “No, I don’t even know him, he doesn’t know me.

“Unless he tried to do it, which I doubt. He was a bit lost, coming from the wing into the middle of the field … They can’t make up a sentence based on an injury. I’m not going to say they have to make it more time.”

It’s been a luckless run of injuries for Knight. The 27 year old has twice been sidelined with concussion and has also had to overcome a shoulder reconstruction, a hip reconstruction and an ankle cleanout. However, he was keeping a positive mindset as he prepares to return from the latest setback.

“I’ve really struggled in the past with injuries, I get stuck on what I can’t do,” he said. 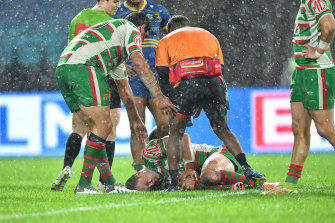 Liam Knight lies on the turf after being injured by a cannonball tackle against Parramatta.Credit:NRL Photos

“I don’t know if things have changed with where I’m at in my life or it’s the positive people I have around me, but I want to stay focused on what I can do. I can get surgery, I’ve had a lot of injuries but can strengthen other areas and hopefully come back a lot better, a lot stronger in other areas as well. That’s what I’m striving towards. I can learn some stuff as well. I can spend time in other areas in life.”

The sabbatical will be an opportunity for the former Manly and Raiders forward to consider potential post-football avenues.

“I’ve got a few interests. I’m into real estate, I can talk a lot of shit. I can have a crack at that and see how I like it,” he said.

“If anyone wants me, I’ll see what I can learn. I’ve got a can-do attitude and I’ll work for free. I can sit in someone’s pocket, shadow them and see if I like it.”

Knight has retained his sense of humour despite again being sidelined.

“If Toby Rudolf can come back from an ACL injury, I refuse to believe I can’t,” he said of the Sharks prop, a close friend and former roommate. “If I don’t laugh about it, I’ll cry about it.”

Rugby Australia, Lions must work hard to bring magic back to ugly tours