Home » Rugby » ‘I’m going to do this my way’: Slater ready for new Origin role

He’s learnt from the likes of Craig Bellamy, Mal Meninga and Wayne Bennett, but new Queensland coach Billy Slater is adamant he’ll be his own man now that he’s taken up the clipboard.

The Queensland Rugby League on Friday announced Slater as the Maroons coach for the next two years, a chance for one of the game’s greatest-ever players to further contribute to the state. In taking up the role he will come up against friend and Nine colleague Brad Fittler, whose Blues side has won three of the past four series.

“To be honest, from afar I’ve been extremely impressed with what Brad’s been able to do with NSW,” Slater told the Herald.

“He has created a real unity within that culture. It’s not an easy thing to get great players to play together as one and he excelled at that this year. I’m not naive to the fact of what we’re up against.

“At the same time I’m doing this because I care about Queensland. I know we can grow and develop in an area where hopefully we can emulate the past and hopefully surpass that and go on and do our own thing.”

Slater was the superstar fullback for Queensland in a glorious run that netted the northerners 11 out of 12 series, including eight consecutive series in a row. Pressed on what success looked like, and whether the Maroons were again capable of a similar dynasty, Slater said: “It’s great to talk and focus on results. I’m in the media, I understand it. But when you’re a player and a coach, it’s really important not to. 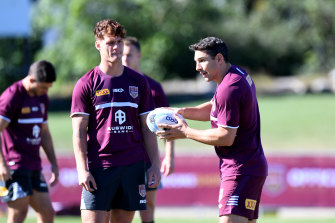 “It’s important to have your big-picture goals and then bring your mind and focus to where you’re feet are at, the stepping stones that get you there.

“As a media personality it’s great to talk about what is going to happen and that sort of stuff. But that’s not my job as Queensland coach. It’s to help Queensland players grow into State of Origin players and give them the best opportunity to make their state proud.”

Slater has enjoyed success at every level, whether it be for the Storm, the Maroons or the Kangaroos. At each point he has been mentored by some of the best in the business, including Bellamy, Meninga and Bennett. The Dally M winner said those experiences were invaluable, but he will be putting his own stamp on the role.

“That doesn’t mean it’s going to work the same for me, but it’s given me an experience in that environment.

“One thing that is important is that you have to be your own coach. Yes, I’ve got to learn, yes I’m going to evolve, yes I will listen to other people.

“But I need to be me. That’s a really important factor. As much as I’m going to lean on people around me, I’m going to do this my way.

“There is a lot of responsibility in and around the head coach of Queensland. It doesn’t scare me. It’s important I don’t complicate it. I’m not trying to build a vaccination clinic for COVID; I’m in an environment that I know best.

“That gives me comfort. Yes, there will be things that I learn and I’m going to make mistakes, but the best thing I know in my life is rugby league.”

The QRL has previously stated its intention to give Slater all of the help he needs to succeed, with the likes of Johnathan Thurston, Cameron Smith, Bellamy and Bennett mooted as potential additions to the brains trust.

“In regards to the likes of Mal and Wayne, they are our two most successful Origin coaches,” Slater said.

“To have them anywhere in the organisation is going to be a plus. Mal has obviously got his commitments with the Australian Rugby League at the moment, so we respect that. This is just one piece of the puzzle, the coach of the State of Origin team. I don’t think today is the day to throw out who I want around me.”

Bellamy, a former NSW coach, said Slater is ready to take the step up as a head coach.

“He’s not going to be a guy who dips his toe in to see how cold it is, he is either out or he is all in and he will be all in here,” he said. “I don’t think Queensland could be in better hands. They couldn’t find a more proud, more passionate person.”

Asked if he would cut off his guidance to Slater now that he is involved with the rival state, Bellamy chuckled: “He knows more about footy than me, I go to him more often than he goes to me.

“So I don’t think he will be talking to me about footy.”