Carlton forward Charlie Curnow is increasingly confident he will return to play in 2020 although he admits just getting back to training would be a good start.

After having several operations in the off-season that included a pin being inserted into his knee and wires wrapped around his knee cap, the 23-year-old is on the road to recovery after an operation last month removed the wires. 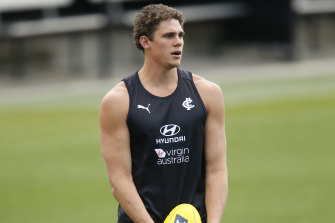 "It feels like a normal knee again so I am pretty happy with it," Curnow said.

With the competition halted and the season potentially extending beyond September the time frame for Curnow's return remains clouded, with the promising forward saying he is in the hands of the Carlton medical staff.

"I'll go off the way my knee is feeling and when that is feeling really better and 100 per cent I reckon that is when I will get the all-clear," Curnow told carltonfc.com.au.

"I'm not too sure when that is going to be."

The Blues have been reluctant to declare a return date, aware that the injury – sustained in two separate incidents in the off-season – is serious and could rule him out of 2020.

Curnow followed the party line on the "will he, won't he" question but displayed some cautious optimism when asked when he might return.

"It is tracking really well. I am hoping to play footy this year, I am not definitely not ruling anything out and I am pretty confident I will," Curnow said.

"I have just got to listen to it and make the right decisions. Training would be nice … that is what you miss the most."

The Blues forward is recuperating with family in Torquay on the surf coast and is following the club's program using a Watt bike and the home gym.

He is also able to consult with a club physiotherapist as they map out the way forward.

Curnow admitted dealing with the speculation surrounding his return and the two knee injuries that occurred away from the club – one playing basketball and the other when he slipped on stairs – has been a tough period for him but he is now seeing light at the end of the tunnel.

"Hopefully the next couple of years are going to be better," Curnow said.