ARL Commission chairman Peter V'landys will turn his focus to cracking down on agents after coming to a resolution with players on the revised collective bargaining agreement.

With the reduced salary cap signed off on this week, V'landys will now look to continue to review the Rugby League Accredited Player Agent Scheme after returning from holidays on Monday.

V'landys said he will do so by consulting with the RLPA, a number of high-profile agents and club chief executives in the coming weeks. 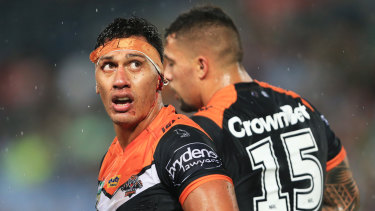 Elijah Taylor was awarded $484,824 in damages and costs after taking civil action against his former manager.Credit:NRL Photos

"We are going to address all of those things," V'landys said in response to recent incidents.

V'landys said the behaviour of some player agents was not acceptable.

"Integrity is not negotiable and it's got to be at the highest possible standard."

V'landys said a number of other matters were also going to be under the microscope in the next few weeks ahead of the 2021 season, including the women's game.

The ARLC is set to launch a major strategy this year with an aim to invest in the grassroots of the game.

The focus will be on increasing participation rates in women's rugby league, which V'landys said will see more financial backing than ever before.

"It's development for all grassroots for male and female, touch and tag," he said. "It's one big strategy plan where participation for us is a major objective of the Commission and naturally one of the focuses is participation by women."

V'landys said the limited four clubs in the NRLW would remain with the Commission opting to take a "bottom up" approach.

"The reason for that is because the actual players themselves believe that there's not enough players to have any more teams because the other women wouldn't be ready for that level," he said.