Ireland 26-5 Scotland: Andy Farrell’s side do all they can with a bonus-point win in their quest for Six Nations glory… now they need a favour from England against France

Ireland kept alive dreams of Guinness Six Nations glory by clinching the Triple Crown with a convincing 26-5 bonus-point victory over Scotland in Dublin.

Les Bleus must now beat England in the late kick-off in Paris to complete a tournament clean sweep and deny the Irish the championship title. 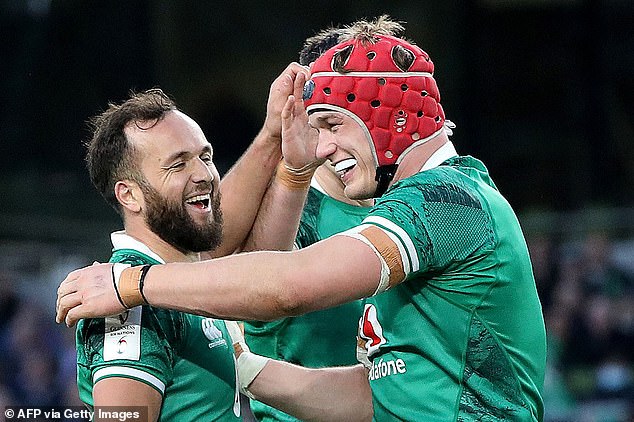 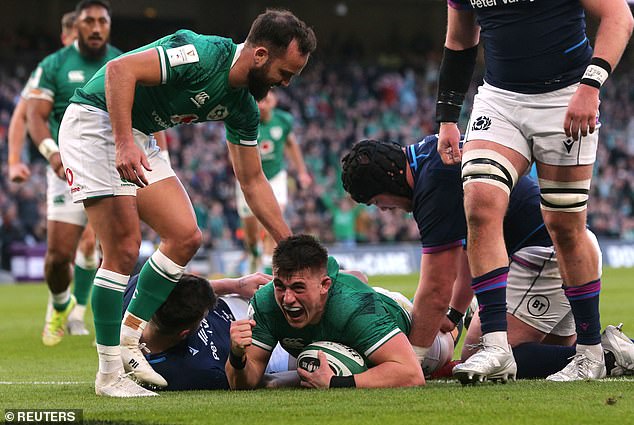 Scotland had prevented Ireland winning the Triple Crown at Croke Park back in 2010 – their last victory in Dublin.

But Gregor Townsend’s visitors never seriously threatened to mastermind an upset and Pierre Schoeman’s first-half score was scant consolation as their miserable run in this fixture continued on a chastening evening.

Defeat for the Scots – an 11th from the past 12 meetings between the teams – was a disappointing end to a largely forgettable campaign which began so positively with the jubilation of retaining the Calcutta Cup. 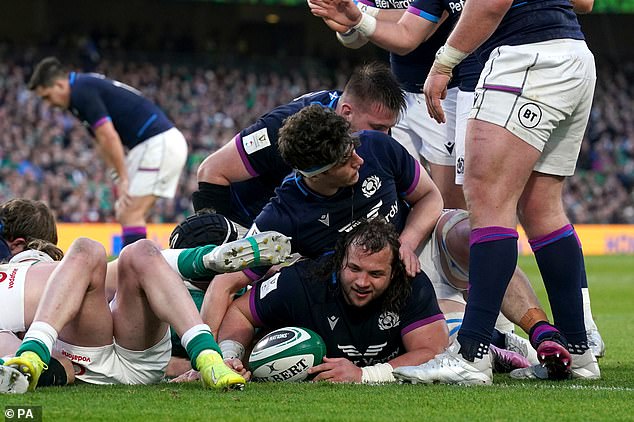 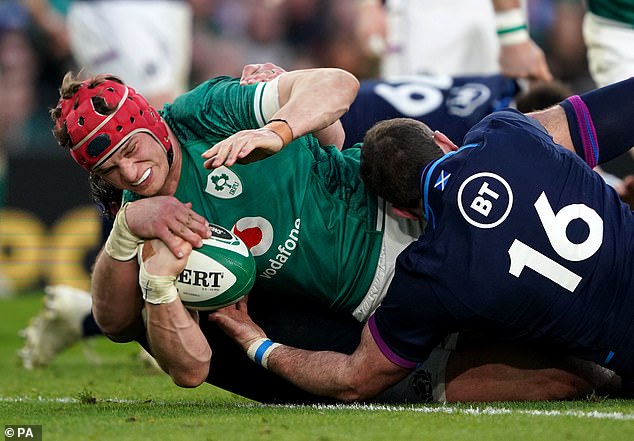 However, they at least avoid finishing second bottom of the table thanks to Italy’s shock win in Wales.

Scotland’s hopes of springing a surprise were not helped by Finn Russell, Ali Price and captain Stuart Hogg being among six players disciplined for breaching team protocols by visiting a bar following last weekend’s win over Italy.

With influential fly-half Russell dropped the bench, the away side began relatively brightly in a frantic opening quarter before Irish hooker Sheehan burrowed over in the 17th minute to calm home nerves.

Ireland’s misfiring scrum was subject to much scrutiny following victory over 14-man England at Twickenham in round four.

Veteran prop Healy struggled on that occasion but became the second member of the Irish front row to cross, bulldozing through the Scottish defence to claim his 10th Test try as the hosts took control. 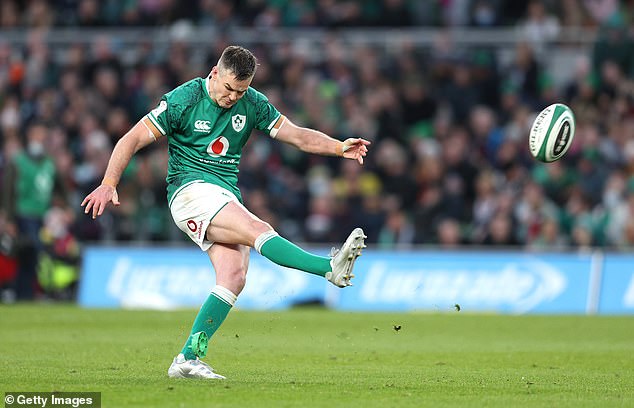 Scotland were in danger of being overpowered. Yet they sufficiently varied their attack to claw a way back into the contest just before the break, aided by a fine break from Darcy Graham.

South Africa-born prop Schoeman was the man to benefit from sustained pressure as he touched down, although Blair Kinghorn – selected in the number 10 role ahead of talisman Russell – was well off target with the conversion attempt.

Ireland began the second period with renewed purpose as they attempted to enliven a fairly subdued crowd. However, it took a stunning last-ditch tackle from Hugo Keenan to deny Hogg a certain score in the right corner.

Referee Wayne Barnes subsequently angered home supporters by ruling Schoeman had not committed an act of foul play in the build up having caught Iain Henderson with a raised arm.

Ireland restored their two-try advantage with an hour played when Van Der Flier exploited a gap to capitalise on a spell of dominance and break Scottish resistance. 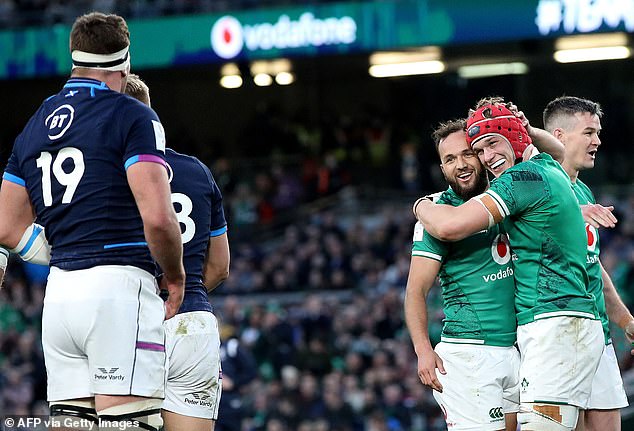 They looked set to be denied but, after Scotland replacement scrum-half Ben White was sin-binned for a deliberate knock on, Murray – who has been a peripheral figure this campaign – touched down his country’s 24th try of the competition to the delight of the majority inside the Aviva Stadium.

Sexton missed the resultant kick to ruin his perfect record. Yet he cared little as he lifted silverware for the first time as skipper.