Home » Rugby » ‘Is that the culture I need to uphold?’: When Worsfold almost walked out of Essendon

Former Essendon coach John Worsfold has questioned the Bombers’ culture and taken aim at how club directors responded to the 2017 elimination final defeat to Sydney.

As the Bombers prepare to celebrate their 150th anniversary against Carlton on Friday night, Worsfold used his speech at the Perth Rotary of Elizabeth Quay on “Modern Day Masculinity,” kicking off men’s health week, to provide insight into his five years with the Bombers. 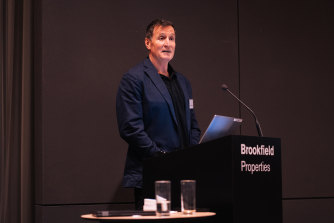 John Worsfold was speaking at a men’s health event in Perth.Credit:Dean Fuller

Worsfold detailed his time taking over a group in late 2015 that had been ravaged by the supplements scandal and “been burnt so badly by this club”. He said he needed to rebuild trust in players who “had just come out of a period of turmoil” and perhaps had lost trust with the club.

“The players had been accused of being cheats, this was going through a public battle, it was in the papers every day … but they got exonerated in May 2015 [by an AFL tribunal], but the World Anti-Doping Authority took that to the Court of Arbitration for Sport for appeal,” Worsfold said.

Following WADA’s appeal, 34 past and present Essendon players at the time were banned for the 2016 season. They returned a year later and made the finals, only to be beaten by 65 points by the Swans at the SCG.

However, it was the post-match events that left Worsfold said left him wondering whether he should walk out of the club.

“As a coach I was so proud of them. We went into the finals. Some of those I talked about had injury battles the previous two games going into the finals, but they wanted to play in the final in their first year back, so we brought them in for the final,” Worsfold said.

“They were a bit underdone and we were rolled by Sydney in Sydney and I congratulated the players on what they achieved post-game and told them how proud I was of what they had done. But I had people telling me post that, that I should have berated them for losing by 50 points, I should have told them that is not what the Essendon Football Club deliver up and that’s not what is expected.

“Even as a coach, you are fighting that. This is coming from board directors of the club … I am thinking ‘I am trying to win these players’ respect and trust back that you guys potentially lost and you want [to diminish] what they have achieved for this club. To win enough games to make the finals this year is quite remarkable.’ Anyway, that was my take on it. Other people thought differently.

“I had to wrestle with that. Was I right? Was I wrong? Should I have been harder? Is this what that football club does? Is that the culture I need to uphold, which, if it was, I probably would have walked out then. That doesn’t align with who I am as a leader of men, but we worked through that.”

The Bombers recalled Michael Hurley and Orazio Fantasia for that final but there had been injury doubts over others.

Former federal politician Lindsay Tanner was club president at the time, while current president Paul Brasher was on the board. In the club’s annual report, Tanner wrote: “Results throughout the year were never guaranteed, but one thing was certain, we played an exciting brand of football and showed the rest of the competition that we can be a force in years to come. In the end, our season didn’t finish the way any of us would have liked, however, our players represented the sash with great pride, and now, having tasted finals football, have an appetite for more.”

The Bombers head into their anniversary clash against the Blues on Friday in 16th spot (2-9 win-loss record) and enduring a horrid year. Their form prompted a contentious mid-season review and legendary coach and current board director Kevin Sheedy this week to question if “people at our club” understand that “it’s a war every seven days – that’s the only way to play and coach”.

Worsfold, a legendary West Coast Eagle, felt the current mood of the club was similar to what he felt after the 2017 final, and questioned why the Bombers claim they are beyond the on-field struggles all clubs face at some point.

“It’s interesting that now, as that same football club are back in the [media] at the moment, the same arguments are coming out – it’s unacceptable, that’s not who we are. Like that’s the only club in the world that has a right to never be average even though the game, the rules of the AFL, are to make sure that everyone gets their turn at the top, which does mean, unfortunately, that everyone gets their turn at the bottom,” he said.