It was talent show time at camp, and Alex Nason didn't know what to perform. He thought he didn't have any special talents. How wrong he was. 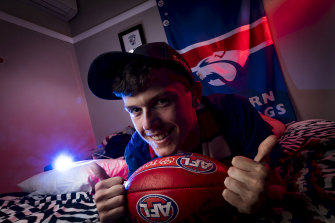 Alex Nason, who lives with autism, is a mad-keen Bulldogs supporters and is pumped for Saturday’s elimination final.Credit:Chris Hopkins

I have a follow-up question: "Who kicked a bag of goals that day for the Bulldogs?"

Alex: "Was it Tory Dickson that kicked like seven goals?" Yes Alex, it certainly was.

"We played Sydney in Sydney. We won, Jason Johannisen kicked a goal in basically like the last two seconds of that match and we won by four points," Alex replies in a flash. It's all correct.

"We played on Friday night, we lost to Adelaide. The weather was really bad I remember."

OK, so he's all over the modern-day Bulldogs. What about old grand finals?

1933? "South Melbourne beat Richmond. They won by 40 something points. I just remember. I looked at these results. And Sydney had the longest premiership drought, they won in 2005."

1957? "Melbourne beat Essendon. They actually won three in a row."

I give him several other years. He nails all of them.

Like everyone, Alex, who goes to Ashwood School for special needs kids, is keen for things to open up again.

Brody has been keeping him company during these challenging times.

"Alex and I became mates at Flying Fox camp. During this COVID period we've been hanging out," Brody said.

But Alex has something to look forward to on Saturday: His Dogs, including his favourite player Marcus Bontempelli, are up against St Kilda in an elimination final.

"Basically everyone in my family goes for the Bulldogs. I actually reckon they might win. Their midfield's really good. They are very hard to stop when they are on," Alex said.