Schadenfreude is the AFL’s 19th club and every footy fan’s second team.

Was anyone, other than Collingwood supporters, not feeling a bit excited at half-time last Tuesday when the Pies were nine points down to lowly Adelaide? 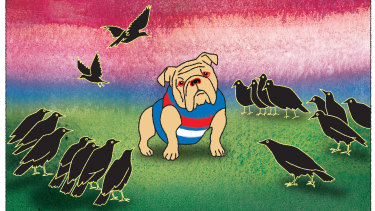 A murder of Crows: Could Adelaide pull off a breakthrough win over the Bulldogs? Illustration: Jim PavlidisCredit:

Rarely has the gulf between the bottom-placed team and the rest been as wide as it appears this year, and with every Adelaide loss the pressure builds on their next opponent to not be the team that breaks the Crows’ duck.

Today it’s the Western Bulldogs’ turn to attempt to avoid that unique anguish of being a highly-fancied team that loses to the cellar-dwellers. 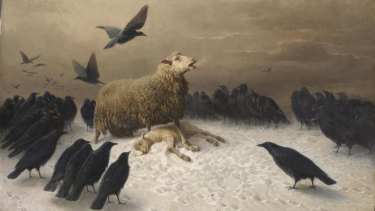 Anguish is the title of one of the National Gallery of Victoria’s most popular works.

The painting, by August Friedrich Schenck, depicts a ewe standing over the lifeless body of her lamb surrounded by crows.

Set within a bleak wintry landscape, it’s clear that the crows won’t have to wait long before they feast.

Claire Molloy: Ireland and Wasps back-row on the coronavirus frontline with the NHS