Home » Rugby » It’s official: Leilua is a Cowboy after pulling out of Samoa Test

Luciano Leilua has officially completed his mid-season transfer to North Queensland after ruling himself out of next weekend’s representative round.

The Wests Tigers announced on Tuesday that they had granted Leilua an immediate release that would allow him to shift to Townsville, where he had already signed for next year.

The Cowboys, however, held off on officially signing him given that the move didn’t come in time for him to be considered for Friday night’s clash with Manly. Of greater concern to his new club was the fact that the former Dragon could suffer an injury while representing Samoa in next Saturday’s clash with the Cook Islands.

Those concerns have been allayed after Leilua made himself unavailable for the Pacific Test.

“I can confirm that Luciano Leilua has pulled out of the Samoan side and has finalised his contract with the Cowboys,” Leilua’s agent Mario Tartak said.

“He’s enjoyed his time at the Tigers, but this is a wonderful opportunity for him for the remainder of the season.” 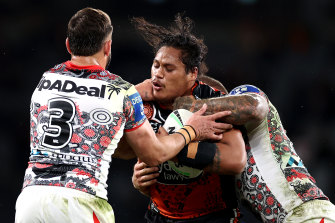 Luciano Leilua is on the move with his North Queensland deal now official.Credit:Getty

Suggestions the Cowboys were holding off on signing Leilua due to salary cap concerns were wide of the mark. He will begin the process of relocating over the weekend.

The decision to stand down from representative duty was a difficult one for Leilua, who earlier this week told the Herald he was keen to honour his Samoan roots.

“It means everything to me. I’ve only represented them once and would love to represent them again. It is one of the best games to play and it will make my family proud.

“We will name a good squad for the World Cup and I feel Samoa will definitely be a force.”

Leilua had signed a three-year deal to join the Cowboys from 2023, but a season-ending injury to Heilum Luki prompted the club to fast-track Leilua’s shift. The 26 year old will be available for selection for the Cowboys’ clash with Brisbane in Townsville on July 2.

It will mark Leilua’s 100th NRL appearance, a milestone he thought he’d mark in Tigers colours.

“I’m gutted, I didn’t want to leave because I wanted to stay and help the boys,” Leilua said.

“Knowing that my 100th game is coming up, I really wanted to play it for the Tigers because that’s where I’ve been for half of my footy [career]. I want the fans to know I’m a loyal man and it’s not a copout, I was planning to see out the year with the Tigers, but this allows them to save some money.”