If footy is serious about protecting heads, now is the time to put them together.

That means probable rule changes at the end of this season, AFL footy boss Steve Hocking forewarned on Friday. But it might also mean elevating safety in contact sport to the level of a public health issue. This is what sports law academic Annette Greenhow from Bond University proposes. 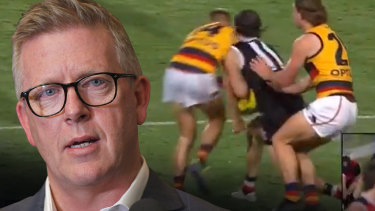 Steve Hocking was clear in his thoughts on David Mackay’s bump on Hunter Clark.Credit:The Age

She doesn’t mean taking it over the heads of the AFL and handing control over to civil authorities, but she does mean combining the resources and brainpower of sports and health departments. She means a meeting of the minds to counteract clashes of heads.

“There’s a strong argument for a collaborative approach,” Dr Greenhow said, “not leaving it just to the sports themselves, but reaching across the board, drawing from the resources of the sport themselves and the capacity of our governments. I’m not talking about governments controlling this, not at all. I’m just saying we can get the best of both worlds.”

It’s happening elsewhere. In Canada, governments are working with hockey and rugby, mostly at school level. In the UK, a parliamentary inquiry opened in March into the link between sport and dementia. It is far from finished. But in both instances, the work to date has tended to concentrate more on remediation than prevention.

Prevention is a utopian ideal anyway. Melbourne magistrate, broadcaster and student of all sports John O’Callaghan sums it up elegantly. “The aim should be to find ways to ameliorate or eliminate the likelihood of serious head injury while preserving the culture of the game,” he said. “I don’t think we could eliminate the possibility.”

David Mackay arriving at the tribunal hearing on Thursday.Credit:Nine News

O’Callaghan’s idea is for the AFL to convene a panel of current and former players, sports scientists and legal experts to prepare a paper envisaging a new approach to playing. It would be a blueprint for the future, providing certainty for players and umpires and allaying the fears of parents.

What has become clear this week is that when it comes to reform, the tribunal is a blunt instrument. For one thing, it’s as adversarial as any on-field contest it seeks to adjudicate upon. Each side takes a position and sandbags it. There’s no middle ground.

For another, it’s not a rules committee, nor a task force. It’s there to judge each case on its merits under the rules as they stand. In the David Mackay case, it took the AFL’s justice machinery two days to even find a rule he might have broken. It’s no wonder the AFLPA protested.

For a third, the tribunal deals only with outcomes, not intentions. As has been well-noted, several players made attacks on opponents last weekend that were a good deal more malign in their shaping than Mackay’s on Hunter Clark, and it was only by the grace of God that they did not end up in the dock. 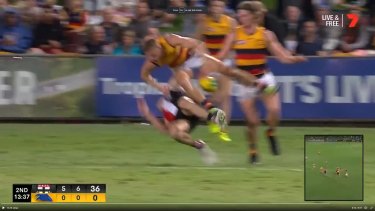 Punishment per degree of injury only is scarcely going to lead to a new mindset. Punishment delivered as fines also is problematic; it implies that a player can buy his way out of an offence. But strict liability, as was argued by AFL advocate Jeff Gleeson in the Mackay case, seems harsh.

On Friday, Hocking said the AFL accepted the tribunal’s exoneration of Mackay, but still believed he’d been careless. His case will still be regarded as a catalyst for change. “We make no apologies for taking action to make the game safer for participants at all levels,” he said. 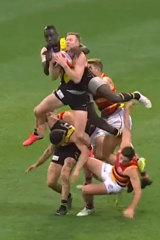 If the issue was as narrow as the Mackay-Hunter type of incident, it might be possible to frame a new rule. Borrowing from soccer, it could be that players can approach the ball as fiercely as they please, but if one is even fractionally late, they are liable for a card.

But it’s wider and deeper than that. The AFL says the head is sacrosanct, but at best it’s sortofsanct. Commentator and former Port Adelaide premiership player Kane Cornes made the point this week that if head protection was paramount, pack marking, with all those flying boots and knees, would have to be outlawed.

The Riewoldt marks, both of them, would have to go. Both amazed by their lack of regard for their own safety, but nor was there duty of care for anyone else.

In footy, there are more bodies on the ground than in any other sport, not contained behind real or notional lines and often squeezed into half the arena. It’s Bourke Street with a ball.

“Dancing is a contact sport. This is a collision sport,” said veteran footy strategist David Wheadon. Bodies are bigger and more powerful than ever, and all of them are obliged to defend at all times. “The collisions are much bigger than they ever were,” Wheadon said. “It’s tougher than it’s ever been – but not dirtier.”

And, like it or not, footballers relish the contest. For this, we have a control group. Suddenly, women are playing the game in their thousands. From my conversations, central to the appeal of their new sport is the physical confrontation that is absent from their other sports. So much for the idea that it’s all just an overflow of testosterone. 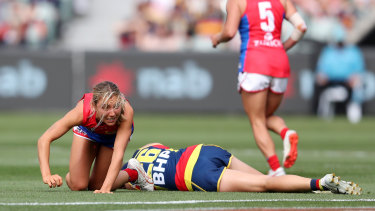 Melbourne’s Eliza McNamara and the Crows’ Chelsea Randall after a heavy clash.Credit:Getty Images

Still, the toll – short and long-term – cannot be ignored. Nor can the seemingly irreconcilable goals of staying true to the edgy thrill of sport while inoculating it against damage.

It is exercising minds in other sports. In cricket, the Marylebone Cricket Club has given itself all this year to re-regulate the bouncer, but began in February by noting how the short ball was core in the game’s culture. Soccer is contemplating ways to mitigate harm from heading, which is even more intrinsic to that code.

The contemporary challenge for sports, including footy, is that head injury is not the purpose, but nor is it wholly incidental. It is brought into sharper relief in these times by the rising consciousness of, and attention on, mental health. No sportsperson wants to have serious injury on their mind, either suffering or inflicting it. 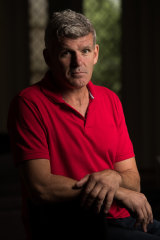 Another driver is the fear, not exclusive to the AFL, of future legal claims. “There’s certainly a duty of care,” said Dr Greenhow. “Whether there’s a binding legal duty we don’t know because that’s for the courts to make a determination.”

Former Melbourne player Shaun Smith was awarded $1.4 million last year, but that was from his insurance company, not the AFL. Long-time campaigner Peter Jess is preparing a class action and in the meantime has urged the league to establish a $2 billion trust fund.

So what to do? Concussion-proofing the game is morally appealing and theoretically possible, but the practicalities remain intractably vague. No-one can say how it would look. A modified form of the game was trialled in two recent pre-seasons, but if AFLX is the answer, no thanks.

Jess and others say players must learn not to weaponise their bodies, but simply to be out there means to take on a kind of ballistic guise. 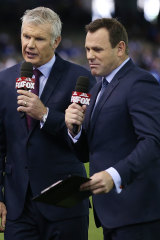 On Friday, former players forecast tweaks, but what good will they do? Recent experience of other rules says that tweaks lead only to more tweaks.

There has been no more consistent urger for a radical new approach to the minimisation of head trauma in AFL in recent years than dual North Melbourne premiership player David King, but even he acknowledged on Friday that a remodelled way of playing might take five years. Conditioning is, by its nature, a slow process.

So it might well be as Dr Greenhow says, that what this needs is a whole-of-society project. She says some sports already are working jointly with the AIS and the Australian Medical Association on new rules and protocols. She observes that it is common in other spheres to draw up best practice charters that everyone is expected to observe, so why not sport? 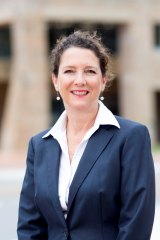 “Governments are getting interested in this topic because they see it as falling within their remit as guardians of public health,” she said. She expands the public interest argument. “Ex-players say it’s their decision (to take the risk to play),” she said. “They’re entitled to say that, but it doesn’t take into account the wide social cost. It’s very much externalised. It may be years later, but it’s very high.”

Dr Greenhow understands the central dilemma. She was sensitised to the issue of contact sport and all its shades more than 10 years ago when a school-age daughter surprised her by declaring her intention to play rugby league.

“We have to make sure our kids are coming through a system that’s optimally safe, bearing in mind that contact happens in contact sport,” she said. “You can’t make rules that are going to eradicate all of that contact without changing the essence of the game. It’s a really complex issue.”