The 2008 No.1 draft pick Jack Watts has retired, while two Gold Coast Suns players have also called time on their careers.

Watts, 29, played 174 games across 12 seasons, moving from Melbourne to Port Adelaide ahead of the 2018 campaign. 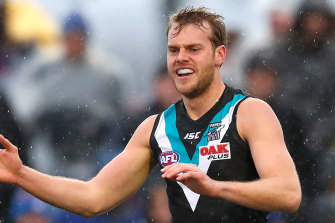 He played 21 games for Port Adelaide but broke his leg in round two of 2019 and has not played since.

"I have been thinking long and hard about my future for a while and contemplating retirement," Watts said.

"Since my injury, I feel my body has let me down and I have been struggling with the physical and mental requirements of getting back to the level of fitness that's required at AFL level.

"Speaking with Ken [Hinkley] and Chris [Davies] and my manager in the last few weeks, it feels like the right decision for me to step away and look for new challenges in the next phase of my life.

"I feel lucky to have had 12 years in the game and while there have been some challenges, there have also been some amazing memories both at Melbourne and Port Adelaide.

"I'm so grateful for all of the opportunities and experiences footy has given me and the friendships I will take with me away from the game.

Horlin-Smith spent eight seasons at Geelong and two at the Suns while Miles played at GWS, Richmond and the Suns from 2012 onwards.

"I probably haven't had your typical 10-year career, but I am extremely grateful for the opportunities that my journey has afforded me," Miles said.

Horlin-Smith said: "My time at Geelong afforded me a host of experiences, including my debut game, however I want to also thank the Suns for the opportunity they gave me to continue my career."

Neither player featured for the Suns in 2020.

Wighton takes on Keary in Blues audition. Joey has picked one as the best No.6 in the game