You could count on one hand how many people in Australia thought signing James O’Connor was a good idea in 2019.

After his botched comeback in 2015, where he returned to Europe less than a year after signing with the Reds having missed out on the World Cup, the decision to bring back O’Connor shocked the nation.

With an Olympics campaign on the horizon, Australian Sevens coach Tim Walsh got the wheels in motion. The idea pricked Michael Cheika’s ears ahead of the World Cup and it gathered momentum when Rugby Australia DOR Scott Johnson found out and became hellbent on finding the Wallabies utility back a Super Rugby franchise. 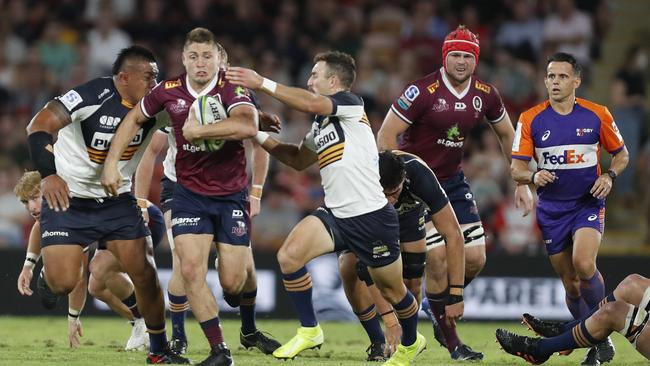 James O’Connor has been an inspiration since his return to Australia.Source:Getty Images

Next it was Reds coach Brad Thorn, who only a year earlier had shunned Quade Cooper and banished James Slipper and Karmichael Hunt, who had to be convinced.

But what you didn’t know is the bad boy of Australian rugby sacrificed hundreds of thousands of dollars to return.

O’Connor was understood to be on $800,000 per season at English club Sale.

He was lured home by the Wallabies jersey and took a massive financial hit, as he signed a deal worth an estimated $300,000.

Less than two years later, few, including Thorn you would imagine, could possibly have imagined how successful their punt on him would have turned out to be.

On Saturday, the 30-year-old masterminded the Reds’ 24-22 come-from-behind win over the Brumbies to continue their unbeaten streak in 2021 and seal their first home final since James Horwill lifted the Super Rugby trophy in front of a sold out Suncorp Stadium a decade ago.

His two second-half cross-field kicks which resulted in tries and decision to, first, point to the posts from penalties and, second, to kick the high-pressure goals showed just how skilful and mature he’s become. The 30-year-old has gone from strength to strength.Source:Getty Images

Without direct-running centre Hunter Paisami, the Reds struggled to get across the gain-line and O’Connor was too lateral in attack and failed to take the ball to the line square, as his intercept pass to Tom Banks showed.

But when something needed to change, O’Connor stood tall.

It’s why he’s considered the front-runner to hold onto the Wallabies No.10 jersey when Dave Rennie’s men play France in June.

Brumbies playmaker Noah Lolesio is considered the future for the Wallabies, but for now it’s understood RA believe O’Connor is back to full pace after years of being injury-plagued and is on track for the 2023 World Cup.

Such has been the spectacular nature of O’Connor’s comeback calls are starting to sound to make the 55-Test back the Wallabies captain.

While it’s understood there haven’t been any discussions to turn away from Michael Hooper, given the openside flanker is in Japan, the Wallabies’ record under his leadership is poor and the rise of Fraser McReight at the Reds, there is a genuine feeling change is needed.

Last month Rennie said he had been in regular dialogue with Hooper, who is widely respected by the Wallabies playing group, in Japan, but the New Zealander wouldn’t confirm whether he would retain the captaincy.

O’Connor, meanwhile, has turned heads as captain of the Reds this season in the absence of the injured Liam Wright, who made his return from injury via the bench against the Brumbies. The Reds came from behind to beat the Brumbies and seal a home final. Photo: Getty ImagesSource:Getty Images

He might have said he was happy to hand the captaincy back to Wright when he returned last week, but there’s no denying O’Connor has shown his game smarts as captain.

It was back in March he pointed to the posts twice against the Brumbies despite trailing 17-0. Later that night, he opted to take three when trailing by more than a converted try with only six minutes remaining. Ultimately, those decisions paid off as the Reds broke their seven-year drought down in the nation’s capital.

O’Connor did it again on Saturday.

Brumbies coach Dan McKellar will rightly feel aggrieved his side wasn’t awarded a penalty at the death.

With the Brumbies just metres away from the Reds’ line, Wright clearly had his hands in the ruck and should have been sent to the sin bin as the ball spat free and the home side dived on it, before booting the ball down field.

Making the decision all the more perplexing, experienced referee Nic Berry appeared to have his arm out ready to award a penalty before he strangely pulled it down and told the players to keep playing a split second later.

Only a week earlier the Waratahs almost sent their clash at the SCG into extra time as the TMO was asked to check how the ball had popped out from a ruck. 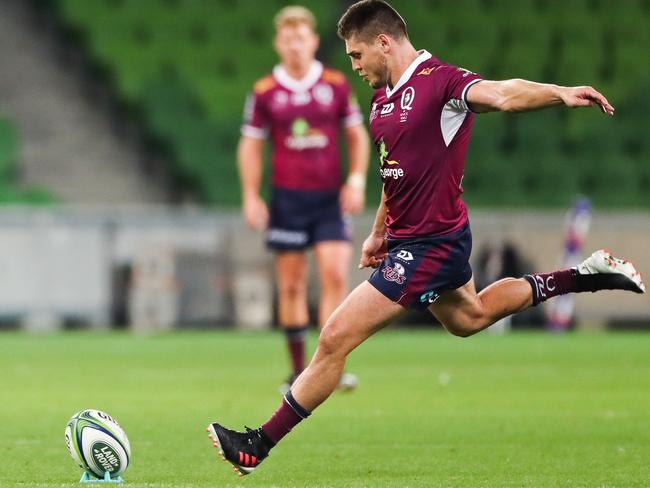 O’Connor’s goalkicking is another string to his bow.Source:Getty Images

Replays showed Tom Cusack — just like Wright on Saturday — had hands in the ruck and was shown his second yellow card. One phase later, the Waratahs scored out wide but missed the chance to send the match into Super Try as Will Harrison missed the sideline conversion.

On Saturday, the refereeing blunder denied the Brumbies a chance to steal the match and, likely, host a final.

In other news, the Rebels are set to announce Wallaby-in-waiting Trevor Hosea has put pen to paper to re-sign with the franchise.

Hosea is one of 40 players who has joined the Wallabies’ training squad in Sydney to prepare for the upcoming French series.