Matthew and Andrew Johns have bluntly rejected the offer to “lay out witches’ hats” as assistants to embattled Samoan coach Matt Parish.

As speculation builds about Samoan players boycotting the World Cup later this year if Parish remains in the job, Matthew Johns has responded to calls from Parish for the Johns boys and Sonny Bill Williams to join his coaching staff. 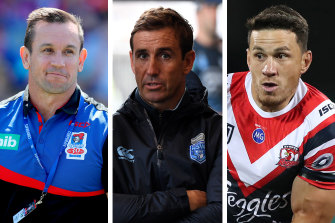 The idea has been clunking around Andrew’s head for some time, having visited the Pacific nation on surfing tours over the years and seeing the natural talent everywhere he looked. He was also there helping out following the devastation of the 2009 tsunami.

What people misunderstand about the Johns brothers – and a lot of players past and present for that matter – is how much they want to give back to the game that provided them with everything.

It shouldn’t surprise anyone that Williams wants to give back to his father’s country of birth, too.

The mere notion of Samoa becoming an overnight powerhouse as Tonga did a few years ago, with the potential to challenge Australia, is exciting for the international game.

Imagine, ahead of the World Cup in England, a backline of Roger Tuivasa-Sheck, Ken Maumalo, Stephen Crichton, Brian To’o, David Nofoaluma, Dylan Brown and Jarome Luai that’s been crafted by the Johns boys.

Now imagine a pack of Payne Haas, Tyrone May, Junior Paulo, Isaiah Papali’i, Jaydn Su’a and Tino Fa’asuamaleaui among many others that have just been fired up and inspired by Sonny Bill.

While none of these players have spoken publicly about whether they will play under Parish, enough of them have indicated to the Johns brothers why they will only play under their regime.

Parish took on the role in 2013 and had some initial success but since then Samoa have lost eight of their past nine Tests.

We’ll refrain from getting bogged down in the messy politics of Rugby League Samoa, which has emphatically backed Parish, but former representative Reni Maitua is stunned about the governing body knocking back the chance to work with the Johns brothers and Williams.

Maitua was one of 34 signatories who sent a vote of no confidence in Parish to Samoan Prime Minister Tuilaepa Sailele Malielegaoi earlier this year. Parish has since claimed some players were unaware of the letter’s contents when they signed.

“We’ve regressed since 2013,” Maitua said. “The Johns boys and Sonny see the potential in a small nation to become world champions. At the last World Cup, we reached the knockout stage off the back of a draw. That’s not good enough.

“Matthew, Andrew and Sonny will attract players and sponsors to pay those players. Matt Parish doesn’t have that kind of pull.”

Nothing quite captures the spirit of modern-day rugby league than the wife of an out-of-form player bagging a coach about his bench rotation via an Instagram post containing spelling mistakes and emojis.

But these are funny old times for this funny old game so it’s perfectly reasonable for Canberra forward Joe Tapine’s wife, Kirsten, to unload on coach Ricky Stuart following the loss to South Sydney last weekend. 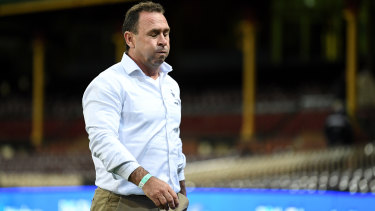 “You have an international player warming your bench for 50 minutes… Your interchanges are killing us!!!” Kirsten fumed. “Refs call count means jak (sic) when coaches are [rubbish bin emoji].”

I know. OMFG. I’m just here for the comments. #controversy.

Kirsten Tapine’s fiery missive has been interpreted as a sign of a deeper problem at the Raiders. It’s an apparent sign that Stuart has lost the dressing room.

That murmur has been around for a while, growing louder as a team that’s supposed be pushing for the premiership finds itself in ninth position with just three wins.

When Josh Hodgson relinquishes the co-captaincy, and George Williams says he wants out because he’s homesick, and Josh Papalii is mysteriously rested, and then Tapine’s wife thumbs a cranky Insta post, it’s easy to suggest Stuart has lost the players’ support.

The alternative view presented by more than a few people at the Raiders is Stuart hasn’t lost the dressing-room at all – he’s taking control of it from a couple of players who have their noses out of joint.

He’s delivered some brutal home truths, which some say could’ve been handed down more delicately, but the contrasting responses from some of his players have been telling.

The Raiders haven’t been happy with the form of Hodgson or fellow co-captain Jarrod Croker, although both have been struggling with niggling injuries.

While Croker seems ready to knuckle down and cement his starting position, Hodgson looks like he wants out of the club altogether.

The Raiders won’t comment publicly about claims in the Herald that Stuart had leaked criticism about Hodgson’s game to Fox League’s NRL 360, prompting Hodgson to hand back the captaincy at a meeting between the pair the next day, but it’s fair to say the coach is furious about the suggestion about undermining his captain.

Hodgson’s ego has been bruised for some time, stretching back to last season when young hooker Tom Starling was receiving favourable media coverage after filling in for the injured captain.

As for Tapine, he’s said to be sensitive to the slightest criticism about his game, which hasn’t been in the same postcode as his form from 2019 when the Raiders made the grand final.

That’s the reason why he’s not getting the minutes he once did. Is that on the coach — or the player?

As for Williams, we’re told his homesickness is legitimate because COVID-19 has made travel between here and the UK problematic.

Nevertheless, the Raiders have made it clear to him he won’t be released because there are no alternatives out there. There’s been a suggestion that Gareth Widdop could return from Warrington to take his place but Canberra aren’t interested.

Just where all this ends for the Raiders is anyone’s guess, although people inside the club say the squad has been bouncing into training all week. A victory over the hapless Knights in Wagga Wagga on Saturday afternoon will release a lot of tension.

No athlete in the history of sport has ever enjoyed being told they’re not playing well.

What you can be assured of is this: the club will be backing their coach — not a couple of disgruntled players.

There’s an argument that Stuart is a “protected species” because he has a lot of mates in the media.

Stuart attracts plenty of criticism when his side isn’t winning, perhaps more than others because he polarises opinion.

Many of us poor hacks have had cranky calls and confrontations with him since he started coaching almost 20 years ago. What appeals most about Stuart is that you always know where you stand with him.

Which brings us back to whether he has lost the dressing room.

It’s been argued that Stuart needs to be softer. More caring. Less confrontational. Give his players a “cuddle”.

Give them a cuddle? Give me a break.

Stuart goes to war for his players, whether it’s in a post-match media conference or after they’ve been tasered by police after crashing out under a Morton Bay Fig. He knocks back beers with them, invites them to his house, treats them like men instead of boys.

If I know the angry little ant at all, he would be boiling with frustration that some of his players don’t care about the result as much as he does. The least they could do is kick a white plastic chair.

“I have spent countless hours crying, the feeling of violation and feeling dirty doesn’t go away. I have nightmares and flashbacks of his face looking right through me. Sometimes I can’t get out of bed.” – Jarryd Hayne’s sexual assault victim begins her statement to the court. Hayne was jailed for five years and nine months on Thursday.

Thumbs up
Medina Spirit cost US$1000 as a yearling. At the weekend, he won the 147th Kentucky Derby to add US$1,860,000 to its overall prizemoney of US$2,175,200. “That little horse has got a heart,” said legendary trainer Bob Baffert, who has now won the race a record seven times.

Thumbs down
The Australian Human Rights Commission’s investigation into gymnastics has revealed horrific cases of sexual, physical and mental abuse. “The first time I was called fat at the AIS, I was 11 years old and weighed 22 kilograms,” reported one athlete. Appalling.

It’s a big weekend for …
James O’Connor, who has been reinstated as Queensland captain for the Super Rugby AU final against the Brumbies to be played in front of 40,000 people at Suncorp Stadium on Saturday night.

It’s an even bigger weekend for …
Roosters young gun Sam Walker, 18, and Parramatta’s youngish gun Mitchell Moses, 26, as they do battle at Bankwest Stadium on Friday night. Goes good that Walker kid, in case you hadn’t noticed.