The most powerful man in Australian rugby and a close ally of Wallabies coach Dave Rennie is on the hunt for a new job as a major high-performance shake-up gathers pace.

The Herald can reveal that Rugby Australia director of rugby Scott Johnson was told in Cardiff, Wales, three weeks ago that his position at the top of the tree was being dissolved as executives chase cost savings and an ambitious centralisation plan. 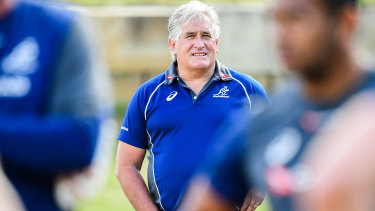 Scott Johnson will not continue as director of rugby. Credit:Rugby AU Media

The role, which Johnson occupied for three years on $550,000 a year, will be replaced by a chief high-performance officer.

RA executives believe Johnson still has a contribution to make to the organisation, however sources with knowledge of the situation indicated he would not be considered for the new role, which will oversee high-performance programs for Australia’s Super Rugby sides – if chairman Hamish McLennan and chief executive Andy Marinos can pull off their planned reforms.

Johnson’s departure will be welcomed in some quarters but lamented by Rennie and his Wallabies assistants, most of whom he recruited and worked closely with during the past two years.

Hired by former chief executive Raelene Castle to help steady the ship in the final year of Michael Cheika’s reign, Johnson was instrumental in bringing Rennie to Australia and assembling his support team of Scott Wisemantel, Matt Taylor and team manager Chris Webb. Those men feel great loyalty towards the 59-year-old.

Johnson was also one of three Wallabies selectors and was said to be the most frequent dissenting voice at the table, watching training and often challenging Rennie on personnel decisions. 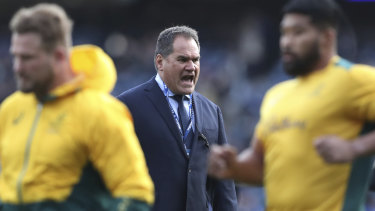 Dave Rennie has a close relationship with Scott Johnson.Credit:AP

His deep involvement with the Wallabies raised eyebrows elsewhere in Australia’s top representative teams. He had little or nothing to do with the sevens teams in the lead up to their Olympics campaigns this year and was not involved in the decision-making on the futures of the men’s and women’s coaches.

Elsewhere, Johnson’s influence has been controversial at times. A Wallabies and Waratahs assistant coach, he worked overseas for almost two decades, returning home to a rugby landscape vastly different from the one he left.

He went on the warpath against player agents, critical of their role in a growing drain of mid- and top-tier players offshore. It was a high-stakes gamble, relying on Johnson’s extensive relationships throughout the game and internationally, but it was at odds with the realities of the modern game.

Players see agents as useful middle men in the contract negotiation process, particularly when dealing with Japanese and European clubs. They do not trust Rugby Australia or their Super Rugby employers to act with their best interests in mind.

It was Johnson who led the failed negotiations with Wallabies stars Samu Kerevi, Quade Cooper and Sean McMahon for the trio to join the Wallabies on their spring tour of Europe last month. It was an embarrassing episode for RA and revealed the Wallabies coaching unit kept Marinos and the RA board in the dark on the realistic chances of securing the players’ services.

But Johnson is also victim of the desperate finances of rugby. Hired by Castle pre-COVID-19 to support the Wallabies with structure and oversight that would outlive the fortunes of various coaches, Johnson is too expensive for RA.

The organisation was bailed out by loans from World Rugby during the height of the pandemic and can no longer afford to have more than $500,000 of precious revenue tied up in one role.

Johnson’s pivot – it is yet to be determined whether he will stay on as a selector or in another supportive role – will be just the start of the changes if McLennan and Marinos have their way.

They are plotting a wholesale centralisation of high performance, streamlining coaching and athletic development roles, ending the warehousing of players in the major nurseries of NSW and Queensland, and centralising the contracting of players.

It will require approval by a vote of all member unions, a stumbling block that could yet scupper the reforms with Queensland and NSW holding the majority of votes.