Home » Rugby » Jones back as Saints prepare for finals ‘journey’

Running defender Zak Jones will return to a St Kilda line up that has tapped into the experience of its seasoned recruits ahead of Saturday's elimination final against the Western Bulldogs at the Gabba.

Coach Brett Ratten confirmed at training on Friday that Jones (hamstring) will replace the injured Josh Battle (foot) and be the only change for the cut-throat clash.

Jones was hurt on September 10 and missed the round 18 clash against Greater Western Sydney but has been an integral part of the side at half-back in his first year with the club. 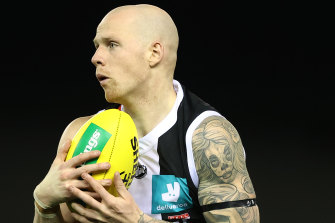 The former Swan also has finals and grand final experience and will, along with the likes of Paddy Ryder, Brad Hill, Dan Butler and Dan Hannebery, be among the seasoned recruits the Saints will look to in the club's first final since 2011.

Jack Lonie (knee) will play, according to Ratten, while Jake Carlisle will also line up but, should the Saints win, there is no guarantee he will be available for the semi-final as his partner is due to give birth.

Ratten said the Saints had addressed that this was the maiden finals campaign for so many of their players, and he even subliminally took the heat off his men when asked about this.

"We sort of spoke about 'this is part of the journey for us' playing finals and trying to get our football club to a point where this is a regular occurrence," Ratten said.

"I dare say this experience for [Nick] Coffield, [Hunter] Clark, [Ben] Paton and [Ben] Long, these games are going to be worth 20 for them. The experience and the pressure – they'll learn so much out of this.

"We've probably got one of the youngest backlines in the competition, week in week out, and we've stuck with that and they've really developed well. The experience they'll get from this will be just enormous."

Midfield accumulator Hannebery returned against the Giants from hamstring surgery for just his sixth match of the season and has benefited from more training during the pre-finals bye.

"He has really thrived with the week off. He has done a bit of extra work, more than the others," Ratten said.

"We used him for 60 per cent of the game last week against GWS and he has had the week off and bounced back really well."

Steele wins Saints best and fairest in a landslide