‘It’s not good enough, why would it be good enough?’: Eddie Jones admits the prospect of yet another fifth-place Six Nations finish for his England side would be UNACCEPTABLE… as they prepare to face France next

Eddie Jones has admitted the prospect of a fifth-place Six Nations finish for the second successive year would be unacceptable for his England side.

The defeat by Ireland means they will once again be consigned to mid-table mediocrity when the championship concludes on Saturday.

Last year, only whipping boys Italy finished below England. A repeat of that could happen if Jones’s men are beaten by Grand Slam-chasing France in Paris on the final weekend. 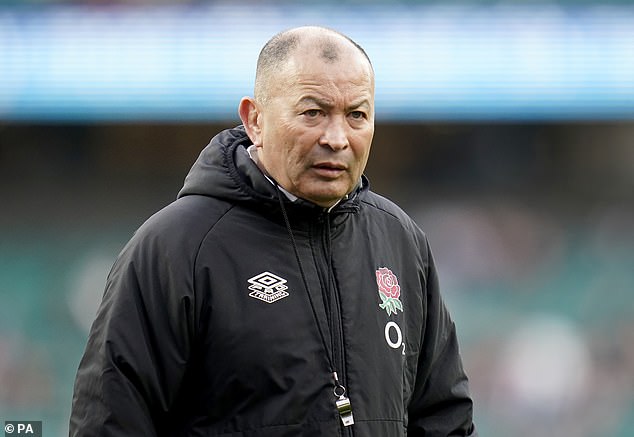 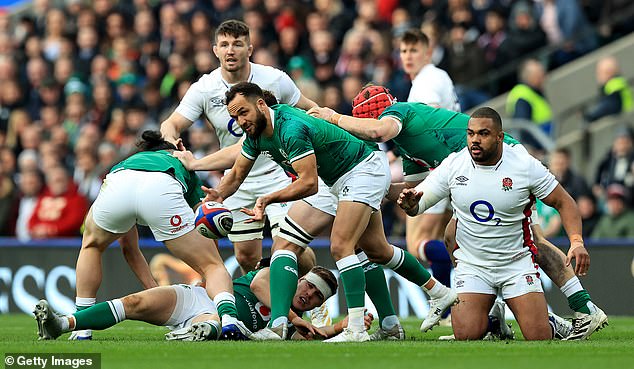 Pressed on that prospect, Jones said: ‘It’s not good enough, why would it be good enough?’ But he insisted: ‘We’re only going to get better and we’ll do that by working hard on the field.

‘We’ve taken massive steps forward. Obviously, our aim was to win the championship. We’re disappointed we haven’t, but sometimes circumstances mean the results don’t mimic the performances. The results will catch up.’

Eddie Jones always rails against the idea of copying another side, but Wales showed France can be fallible. Wayne Pivac’s men put France under severe pressure with an astute kicking game and a strong defence. England could do a lot worse than try something similar.

One way of challenging France with a strong and improved kicking game would be to recall Ben Youngs in place of Harry Randall at scrum-half. Randall has many qualities, but Youngs’ kicking is far better.

England played with 14 men for 78 minutes against Ireland but they still dominated up front. It will take a repeat of the physicality and scrum superiority they produced in their Irish performance to upset France.

England can’t afford to lose a player in France. Charlie Ewels’ sending off against Ireland was a clear red card and reckless too. It must not happen again.

France look ruthless behind the scrum and bthey will surely score tries in Paris. England will have to match that, but if they don’t do it at the Stade de France, defeat and another mediocre Six Nations finish looks likely.

Jones has maintained he is happy with his side’s progress with next year’s World Cup in mind.

But his concession after the Ireland game was the first time he has accepted all is not necessarily well.

‘We’ll have a good win against France,’ claimed the optimistic Australian, who will have to do without flanker Tom Curry in Paris after he suffered a hamstring injury against Ireland.

Centre Manu Tuilagi is another who will miss the France game as he is yet to return to full training with Sale.

It means the injury-prone centre will have been absent for the entire Championship.

‘We’ve beaten France in our last two games, so we’ve got a pretty good idea of how to play against them,’ said Jones.

‘We want to take it to them. For them to be playing for the Grand Slam, it does become something in their head and the only way we can make that live in their head a bit more is to play with such intensity that we put them on the back foot.’

Jones admitted Curry’s injury means he might have to replace him with Sam Underhill, despite the fact the Bath man is ‘not fit enough’ to play Test rugby after recovering from injury.

England will update their squad for France on Monday. Wasps tyro Alfie Barbeary, 21, could come into contention for an international debut in Paris.

‘We have to win. I am desperate to win,’ said hooker Jamie George of England’s Paris trip.

He led England’s rearguard display against Ireland alongside Ellis Genge and Maro Itoje and added: ‘We owe it to ourselves to put in a performance which really ruffles some feathers.

‘Six Nations rugby is largely around momentum and, weirdly, we might have some.’

George was dropped initially by Jones, who questioned his desire to make a third World Cup last autumn.

But his performance against Ireland was proof he is far from done yet.

‘It hurt me a little bit when Eddie said he doesn’t know whether I’ve got the fire in the belly,’ said George.

‘My main ambition is for him to never question that again.’

England's clash with the Barbarians in danger of being CALLED OFF