The way Sam Walsh hoisted Carlton atop his shoulders on Sunday, leading the Blues over the line against Collingwood, bears a striking resemblance to the feats of Chris Judd between 2008 and 2015.

Both are complete midfielders; as good in traffic as they are in space, and implanted with the ability to kick big goals at big moments. 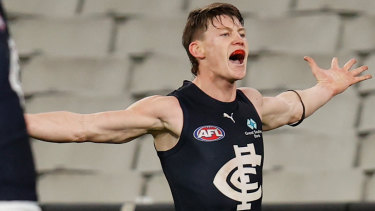 It wasn’t a surprise to see Walsh grab the ball following a forward 50 stoppage at an empty MCG on Sunday, shrug off John Noble and Jack Crisp tackles, and then snap a goal ringed by five Pies in the final term.

With Patrick Cripps out of the side, Walsh took the team by the scruff of the neck and led the Blues to victory against a Collingwood midfield that was, on paper, seemingly better than Carlton’s.

On paper, Brodie Grundy, Taylor Adams, and Scott Pendlebury should have been too much. Not in reality though, largely thanks to Walsh’s efforts.

Another reality is the statistical similarities between Carlton legend Judd and Walsh after their first 56 games of AFL football.

While Walsh has Judd covered for disposals (possession is generally higher in this decade as opposed to 2002 when Judd first played), the pair are eerily similar in other areas.

Remember, too, that Walsh only really became a permanent midfielder this season, with most of his 2019 and 2020 spent out on a wing.

His coach David Teague was full of praise after the game, marvelling at how Walsh had inspired an undermanned midfield, with players such as Paddy Dow, Zac Fisher, Matt Kennedy and Sam Petrevski-Seton, who aren’t usually walk up starts in Carlton’s engine room.

“He just wills his way … and it’s his turn to own this Carlton Football Club, along with his teammates at the moment, and create what they want to create.

“I thought it was one of our better performances, and Sam led that.”

As both a player and a coach Teague has had a close-up view of some of the game’s hardest workers in recent times; think, for example, Brent Harvey, Anthony Koutoufides, Matt Priddis, Nick Riewoldt, Lenny Hayes, and Scott Thompson.

None, according to Teague, can top Walsh.

“He works as hard as any player that I have been involved with, and that is not just game day, that is throughout the week to prepare himself and from a recovery point of view.”

That “work” has clearly been more than physical. Walsh came into the AFL with an elite ability to run and showed that from the very moment he stepped foot on the MCG against Richmond in round one, 2019. 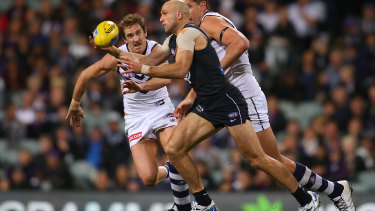 But because he was the no.1 pick and had the lofty reputation that comes with it, every aspect of his game has been scrutinised.

That notably happened in round two of 2020 when the Blues lost by a point to Melbourne. After a gut-busting run up a wing to receive the ball, Walsh twice executed poor kicks going inside 50 with only seconds to play. Better kicks, and his team might have ended with a set shot for goal and the win.

But fast forward to what he did at the MCG on Sunday and there is a striking improvement. The way he caressed the ball around the ground by foot (and did all the running, marking and contested work as well) was vital as the rest of his side battled to work cleanly with the ball.

In Walsh they have the perfect man to lead such a push.

In the name of the father: Grand final history repeats for Bews