Mal Meninga has added a touch of old-fashioned Origin theatre to Australian camp by naming his latest Kangaroos side in alphabetical order.

As veteran halfback Daly Cherry-Evans talked up a team dynamic bereft of any interstate “tension” and unlike any he has experienced in five previous Kangaroos tours, Meninga has trotted out a 19-man squad to take on Italy with names running A-Z and numbers all over the place.

Captain James Tedesco leads Australia against an Italian outfit he represented in 2013 and 2017 after forgoing the offer of a rest from Meninga, though Latrell Mitchell is expected to spend time at fullback in the Kangaroos’ final pool game on Saturday (Sunday 5.30am AEDT).

Nathan Cleary and Cherry-Evans have, as expected, been confirmed as the scrumbase pairing. But Meninga’s match-day line-up can still take several shapes given the possible combinations both out wide and up front.

Both NSW and Queensland coaches have named alphabetical squads in recent years, either due to interstate mind games or sheer selection uncertainty.

Australia’s call to designate player numbers based on seniority was made under World Cup rules that dictate one squad number for the entire tournament. 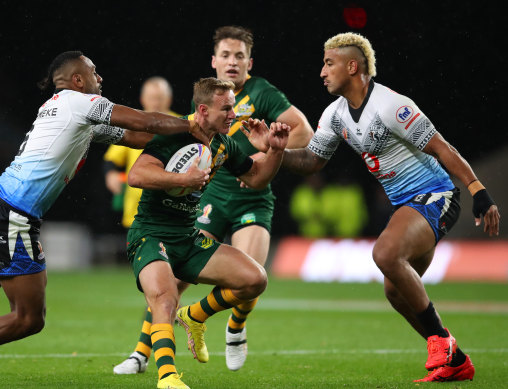 Daly Cherry-Evans returns to the Kangaroos line-up for one last crack at securing the halfback spot.Credit:Getty

Meninga was not prepared to allocate position-based numbers and declare his first-choice 17 before the tournament, and has doubled down since with multiple selection calls still to be decided.

Experienced centres/backline utilities Jack Wighton and Valentine Holmes shape as potential 18th and 19th man options against Italy given Meninga’s oft-stated desire to give all squad members two pool games to push their selection cause.

“Mal’s made [it] clear from the get-go, not everyone’s going to get to play throughout the whole tournament,” Cherry-Evans said.

“Pretty soon he’s going to have to make some really big decisions and it’s going to be hard. If we keep playing this footy people are going to miss out, not because they’re playing bad, but because Mal’s just got to make decisions as coach.”

Cherry-Evans faces an uphill battle to stay at the base of the scrum given Cleary’s near-irresistible selection claims.

But as both have long played down suggestions of a playmaking rivalry, Cherry-Evans said this Australian camp is unlike any other he has encountered.

Putting any Origin animosity aside, Fa’asuamaleaui has been adopted as the third amigo alongside Mitchell and Josh Addo-Carr.

It’s all a far cry from the start of Cherry-Evans’ Test career when the singing of Queensland’s victory song in Australian camp put NSW players’ noses out of joint.

“It’s different to previous years,” Cherry-Evans said. “I don’t know why, but it just is.

“I can’t feel any resentment or any sort of distraction around what happened in the last couple of years of Origin.

“To be fair, we have had a couple of years where we haven’t come together as an Australian side. You could probably assume there would be a bit of tension.

“But we have fun, we enjoy each other’s company and then when it comes to game time we train hard and play well.

“We’ve got a really good leader in Teddy who’s just really made sure that one of our biggest strengths is our connection on and off the field.

“We’re really buying into that, whether it’s card games, coffee games, trips together.”

Hawks come from 40 down to edge Bombers with late goal

Four-try Lions see Jones and Tipuric forced off through injury