Felise Kaufusi will come under the blowtorch from the match review committee for an ugly tackle on Ryan Matterson, which forced the controversial back-rower out of the game as Maika Sivo inspired the Eels to an upset 16-12 win over Melbourne.

Australian and Queensland representative Kaufusi was placed on report after his forearm appeared to make contact with the head of Matterson as he was felled in a tackle during the second half of the clash between the title heavyweights. 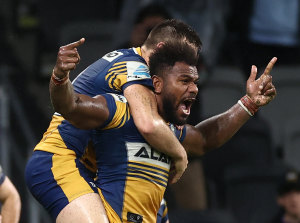 Having stumbled out of the blocks in their opening-round win against wooden spooners Brisbane, the Eels matched the premiers and had off-contract winger Sivo to thank for keeping their unbeaten record intact.

Having opened the scoring, the 27-year-old leapt high to catch an inch-perfect Mitchell Moses kick and touch down for his second try and the winner with just three minutes left. If the ink is not dry on his new deal yet, he might be within his rights to ask for a small bump.

It’s been 35 years since the Eels last won a premiership, but another drought could have been broken on a night where the Eels were shorn on Waqa Blake (calf).

It rained so much both teams only had kickers warm up on the field, and by half-time water was already pooling in the divots on the ground.

Most of them would have belonged to Gutherson, who covered that much ground and insisted on playing on so quickly every time there was a stoppage you almost needed to catch your breath just watching him.

Eels coach Brad Arthur no doubt knows he’s Parramatta’s most valuable player, a standing only set to be enhanced under the game’s infatuation with being even faster.

The No.1 didn’t score in the first half, but arguably saved three tries before the teams trudged up the tunnel. He was part of a three-man crew to keep Nelson Asofa-Solomona raised off the ground, burgled a kick from Josh Addo-Carr’s boot when the Storm looked certain to score and miraculously punched the ball from Cameron Munster’s grasp inches from the line.

The only time he came unstuck was when he innocuously tripped over Justin Olam in back play, requiring his ankle to be strapped.

Thursday night was a Cameron Smith type of night, and not a night which favours Munster or Papenhuyzen.

Smith would have pointed his players this way and that, prodded the ball into corners early in the tackle count and tackled his rivals into submission. It was the type of game Craig Bellamy will really miss the best of the modern era, who surely would have had the Storm better placed than the 6-all scoreline at the break.

“Unfortunately we’d like to put him in, at half-time, ‘out you go Smithy’,” Bellamy said. “We’re learning and that’s part of it. As I said to the players, I couldn’t ask for any more effort, I could ask for a few smarter efforts perhaps.”

Sivo leapt high above George Jennings – the first of two times on the night – to catch a Dylan Brown kick for first points, a margin erased when Reimis Smith scored his first try for the Storm moments after Gutherson’s heroics to deny Munster.

From a flag to the fourth division: Rance ponders footy comeback in Perth