Jason Castagna rocked up to join his family on Christmas Day with a tattoo gun.

He estimates that by the time he left the gathering he had inked 10 tattoos to the bodies of “seven or eight” family members. 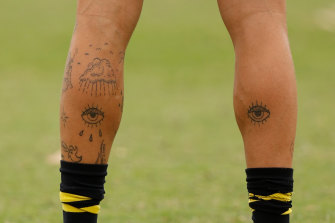 The eyes have it: some of Jason Castagna’s tattoos.Credit:Getty Images

His cousin Jack, a plumber, had a measuring tape tattooed to one of his fingers so he could save some time and effort when sizing up the odd small job.

Castagna’s dad, Carlos, has a cross of some description on his back and the 24-year-old Tiger reckons he’s almost talked his mum, Kirsty, into getting one too.

This is from a man who reluctanctly got his first tattoo four years back as the result of a bet after he lost an epic table tennis battle with former housemate, premiership teammate and current Saint Dan Butler. 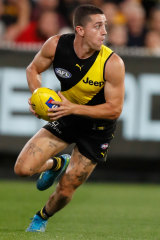 On the run: Jason Castagna in action. Credit:Getty Images

“I ended up getting a tattoo gun when we had that isolation period. I like drawing so my housemates and I thought it would be pretty fun while we were stuck in the house to do some tattoos,” Castagna said. “Mum wasn’t rapt at first.”

By the look of his pegs now Castagna could create a short animation movie if the line drawings on his legs were projected on to a screen when he ran.

And run is what he does, a style that makes him look as though he’s accelerating across rocks to beat an incoming tide when he burns up the grass for Richmond to win the ball or put pressure on the opposition.

Between the ages of 14 and 17 Castagna improved that speed in running sessions with sprint coach Craig Mair, having previously built his stamina when he joined his dad for runs up the steep hills near the family home in Kangaroo Ground.

“We would be closer to walking up it really, just lifting your legs up and getting there,” Castagna said.

With Mair he increased his pace enough to run in a junior sprint at Stawell over Easter.

“It was good fun … he [Mair] was very helpful just for my footy in general,” Castagna said.

“I got to him at an age where you can change your speed, you can fix up your technique and gain cadence and from there I made my speed a strength of mine.“

The strength he developed during that period is part of the reason Castagna will run on to the MCG this Easter – nine years after running at Stawell – to play his 100th game, the rookie selection now a three-time premiership player.

The way he plays symbolises, to some extent, the chaotic, manic style that has helped Richmond dominate the competition for four seasons now.

But along the way he has become a better player too, more respected across the competition for the damage he can do in offence and defence. And there is also a recognition that the way he plays has also helped create the unstoppable mess.

Last Sunday against Hawthorn he kicked a set snap shot on his non-preferred foot, replicating the deeds of another triple premiership player Luke Breust, a player renowned for his silky skills.

Now, when Castagna bursts out the front of the stoppage in the expectation of the ball heading his way he disrupts the opposition, suddenly making the game all arms and legs and bouncing footballs.

This suits the Tigers, who love it when their matches become akin to a pinball machine in multiball mode.

“I do have a bit of a chaotic game style,” Castagna said.

‘He [Damien Hardwick] sometimes doesn’t know what is going to happen but he encourages me to keep doing what I do.’

“I crash in and cause a bit of chaos on offence and defence I guess. ‘Dimma’ (Richmond coach Damien Hardwick) always makes a gag about when I get the ball he sometimes doesn’t know what is going to happen but he encourages me to keep doing what I do.

“He supports me to play to my strengths and it has held me in pretty good stead.

“I mess up a kick here and there but if I stay in the contest I usually can make something out of it.”

That he does, pressuring the opposition and chiming in for goals when required, having averaged two scores a match in his past 94 games, his inaccuracy in the 2019 grand final, when he kicked five behinds, ruling him out of Norm Smith contention.

All that has made Castagna a popular figure inside and outside the fence at Tigerland, one person who finds that being hungry and humble comes naturally. 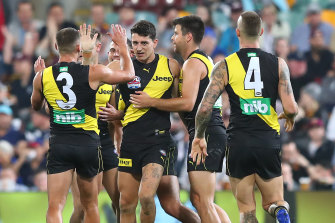 “I definitely have points where I pinch myself. It is pretty crazy to have had this much success so early but I am just so happy to be here and I am having so much fun,” Castagna said.

“You never know how long it can last so I am just enjoying it while it is here and make the most out of it while I can.“

He laughs at the idea he might join his siblings working at Castagna Steelworks, the family business his grandfather Vic started when he emigrated to Australia in the 1960s, one of the business’s first contracts being to provide the steel that held the old seats in the MCG outer in their place. 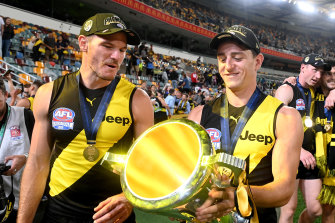 His dad, mum and three brothers Nick, Aaron and Jarrod all work there while his sister Hannah is still at school.

His teammate Kamdyn McIntosh learned to weld at the steelworks and occasionally Castagna will drop in to the family business to find teammates just hanging out there pottering around on something.

Castagna likes to do that too, having his house renovated and using McIntosh’s skills that make him more than just a handy footballer to build his shed.

“It’s pretty much his shed in my backyard,” Castagna said.

It’s the type of connection these Tigers have soldered since 2017, with Castagna admitting a few teammates couldn’t resist using his well-travelled tattoo gun at the Tigers’ hub on the Gold Coast to get a permanent reminder of their year.

“I’ve done a few. If you look closely you might spot a few of the boys [with them],” Castagna said.

What can never be erased is the role Castagna has played in helping Richmond to three flags, one of 14 Tigers to play in the three, and the first rookie in AFL history to play in three inside 100 games, his shy, steely expression now as much a Castagna feature as his road-runner gait.

He’s hit 100 games. He’s got a few premierships. His legs tell a story. And he’s a Richmond man. But when it comes to the family Christmas he’s creating the same quiet mischief he always has.

“Nothing much has changed for me outside of footy,” Castagna said.