Richmond expect to be able to call on All-Australian defender Dylan Grimes for next week’s blockbuster against Geelong.

The Tigers made heavy work of 14th-placed Fremantle at Metricon Stadium on Wednesday night, but broke away in the final quarter to record a 27-point win and claim second place on the ladder. 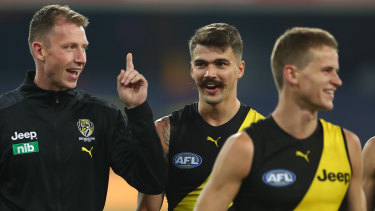 Dylan Grimes, left, injured a hamstring in the Tigers match against the Eagles.Credit:Getty Images

The reigning premiers now have the luxury of a nine-day break before their next game, which comes against fellow premiership contenders the Cats, again on the Gold Coast.

Grimes hurt his hamstring in last week’s win over West Coast, but quirks of the fixture mean he may miss only one match before returning. Important midfielder Kane Lambert (hip) is also set to return, while Shane Edwards – who flew to Queensland on Tuesday – will be back for the Tigers’ last game of the home-and-away season against cellar-dwellers Adelaide.

David Astbury (knee) might also be back for that match, but Dion Prestia (ankle) is a slightly longer-term proposition.

“Lambert will play next week. We think Grimes will be available as well, which is another postive, and then Shane comes out of the hub for the Adelaide game, and we think Dave Astbury will be thereabouts hopefully,” coach Damien Hardwick said, adding that Prestia “is probably finals or thereabouts.”

Hardwick was animated at three-quarter time after the Dockers cut the margin back from 19 points to a goal during a dominant third term.

“We knew it was going to be a frustrating game,” Hardwick said.

“We’ve played four games in 16 days, I thought our ball use looked a little bit jaded to be fair. We sort of asked for a little bit of a lift at three-quarter time, and they responded, which is a positive. 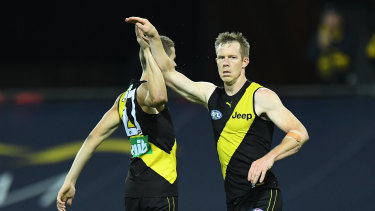 “We always know we were going to have a down game. The positive for us is we probably didn’t play anywhere near as well as we would have liked but we still managed to walk away with the four points, so I was proud with the ability of the players to respond.”

Fremantle coach Justin Longmuir said his side should have made more of their opportunities.

“No I didn’t. Especally the second and third quarters I think we should have made more of our opportunities and the scoreboard probably shouldn’t have looked like it did at three-quarter time. That’s been an issue for us all year,” he said.

Longmuir refused to blame his side’s final term fadeout on the fact that the Dockers had come off just a four-day break from their most recent game against Greater Western Sydney in Perth.

“I’m not going to give our players that out. I think they went to another level and we stayed at a similar level. We hung in there but they just got on top in the contest, they took their contest to another level.”

The Dockers fly to Cairns on Thursday before their meeting with Melbourne next Monday.