A fired-up Michael Maguire launched his boot into a plastic chair at half-time as his Wests Tigers side clung to a narrow lead.

So you can only imagine what furniture was harmed deep under the Sydney Cricket Ground at full-time as Maguire watched the New Zealand Warriors stun his top-eight hopefuls. 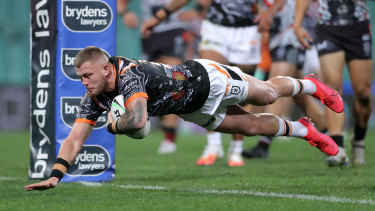 Sam McIntyre crashes over to score for the Tigers.Credit:Getty

When asked if the Warriors loss stung more than the Titans defeat, Maguire paused and said: "I'm not happy.''

It seems inevitable there will be more changes ahead of next Saturday's road trip to Newcastle.

The Tigers had the chance to leap back into the top eight. They raced out to an 8-0 lead with tries to Moses Mbye and David Nofoaluma, his 11th for the season.

But the Warriors worked their way back into the game, then kept coming after the break on the back of a healthy weight of possession and field position.

There was brief hope of a Tigers late, late comeback when Benji Marshall's rifle-like cut-out pass helped put Tommy Talau over in the corner. Mbye nailed the conversion from the sideline to get them within a converted try.

But a collective sigh rang out around the ground in the final minute when Chris Lawrence's final pass for David Nofoaluma sailed forward and into touch.

As bad as the Tigers were, the Warriors deserved credit. As Maguire went Defcon 4, over in the visitors' sheds a giant whiteboard appeared with the words to the team song. It was badly needed for the newly arrived cavalry in the form of Parramatta pair Daniel Alvaro and George Jennings after the departure of some of the club's stars at the start of the week. 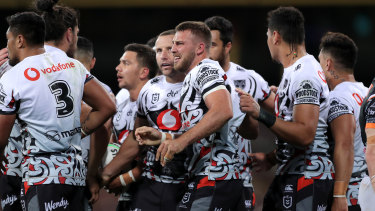 Caretaker coach Todd Payten, who played more than 150 games for the Tigers, quipped he was still not completely sure about the lyrics.

Few could begrudge Payten or the Warriors their win after what they have been through since the competition resumed.

Payten, who remains a big chance to turn the caretaker role into something more permanent across the ditch, said: "We got our bums kicked against Cronulla but over the past four or five weeks we've seen gradual improvements in a lot of effort areas.

"While we leaked a couple of early tries tonight that were pretty soft, we found a way to get ourselves back in the game. I'm really proud.''

Payten made special mention of skipper Roger Tuivasa-Sheck who ''was doing the toughest out of all of us, and is the only Kiwi over here without his family''.

"He's not content … he's a little bit muddled with his feelings, he's always on the phone and it's tough on him,'' Payten said.

"I made the decision to bring my family over, I grabbed him and said, 'it's been a weight off my shoulders and you should look at doing the same'.''

Warriors, who had a serious dig against the Roosters last weekend, will play Manly at Lottoland next Friday.