Sydney could make some excuses going into this match against Gold Coast: missing spearhead Lance Franklin, fresh off a bag of five goals against the Giants last week, and mainstay defender Dane Rampe at the other end. But, on the end of a 40-point belting by the Suns, a few home truths need to be told.

The Swans have been one of the brightest early season stories, with four straight wins to open their account. But after giving up what should have been a winning lead to the scrapping Giants in the dying minutes of last week’s game, they should have been champing at the bit to have at the Suns at Metricon. 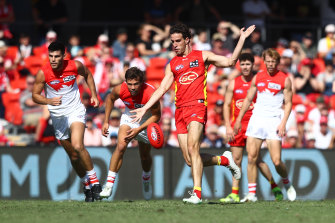 The Swans hung tough early, but with the loss of Hewett and Blakey hobbling, faced an uphill struggle. They also hurt themselves through poor delivery into the forward line, where they struggled to find a target in the absence of Franklin and the omitted Logan McDonald.

In the second quarter, the Suns’ combination of pressure and cleaner ball use began to be reflected on the scoreboard. King kicked his second from a marking contest as two Swans spoiled each other, and Rankine was involved again, kicking two goals at the fall of the ball to complement his two assists, the Suns taking a five-goal lead.

From there the test for the Suns was bringing it home. This club is unfamiliar with winning; now, with everything in their favour, you could briefly sense their tension. The Swans had the better of the last few minutes of the half, Sam Wicks keeping the Swans in the game with a late goal.

But after that flutter of nervousness, the Suns put the Swans away in the third quarter, kicking a further five goals to one, King booting three of them and missing another he should have kicked to see the Suns 49 points clear at the last change. They’d had some home truths of their own to face up to during the week; this win was an excellent response.

Indeed, Suns coach Stuart Dew said later: “This win was started at half-time last week, not at 1.45 [pm] today,” Dew said. “When you play a first half like that [last week, against the Bulldogs] you expect the heat to come.”

By contrast, the feeling at half-time in this match, he said, was “the opposite to last week … It was a sense of, let’s go again.”