It looked an almost impossible dream midway through last season, as one of the AFL’s all-time greats cooled his heels and tried to put his broken body back together.

Today, it looks not only achievable but inevitable – provided Lance Franklin can stay on the park. The magical 1000-goal milestone is fast approaching, and the countdown is on. 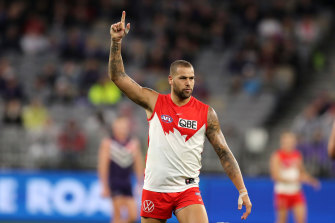 If there can be a silver lining to Saturday night’s heartbreaking two-point defeat to Fremantle for the Sydney Swans, it’s the definitive proof that their best player has still got it.

Franklin’s six-goal haul was his highest since late 2018, and brings him to a lifetime tally of 963 – just 37 short of the number that even neutral AFL fans are desperate to see him hit before he hangs up his boots.

Statistically speaking, it is only a matter of time until he does, so long as his body holds up the other end of the bargain.

But when will the big moment arrive?

Since the start of 2019, his last full season for the Swans, Buddy is averaging 2.875 goals per game – a fair measure of the champion forward’s output in the twilight of his career.

If he can continue at that clip, Franklin would only need another 13 games to hit the 1000 mark. His contract expires at the end of next season, and the Swans have 12 home-and-away matches left this year.

It’s highly unlikely he’ll play in all of them but there’s every chance a few more big bags could bring it even closer within view.

Setting aside 2020, Franklin has averaged an appearance in one in every two Swans games in his last two active seasons, so those 13 games may stretch out to 26 rounds, meaning a 1000th goal midway through next season.

But if he stays on the field, could he knock it down this year? Stranger things have happened.

Sydney host Carlton on Sunday afternoon in their annual Marn Grook game, an event Franklin usually gets up for. Since switching to the Swans he averages four goals in Indigenous rounds, and bagged seven the last time they met the Blues at the SCG in this themed fixture.

At 34, he no longer quite moves as freely as he once did, but Buddy’s tailored fitness program – designed to strengthen his core muscles and posterior chain to prevent any further soft-tissue setbacks – appears to have restored his own confidence in his body and ability to make repeat efforts.

And while he might have reached 1000 sooner if he was a little more selfish, Swans defender Jordan Dawson admitted earlier this month that it was hard for teammates not to kick the ball to Franklin whenever he was screaming out for it.

“My head’s in the game for the team. I understand the fans sit there and watch it from that perspective,” coach John Longmire said post-match on Saturday night, when asked for his take on Franklin’s performance.

“But look, he was fantastic. As far as just getting a couple of games under his belt now and a bit more training … it’s just good to see him in that sort of form.

“Like any other player, you need to be able to train. It actually gets a bit more important when you get older. But we’re also mindful of what he can do – it’s a fine line with the balance of his load. When he’s running around like that, he was obviously in really good form up front.”

Only five other players have reached 1000 VFL/AFL career goals. The last to do it was Gary Ablett sr, 25 years ago.

The Swans’ most famous goalkicker and all-time record holder Tony Lockett (1360) told the Herald and The Age in March he had no doubts about Franklin joining the exclusive club.

“Absolutely he can do it – and do it in a hurry I think,” Lockett said. “Fifty-six goals short, he has a couple of big weeks and you chew right into that. Everyone’s hoping he can for sure.”

Franklin has kicked 19 goals since.

In his last open press conference in 2019, Franklin said that he wasn’t thinking about the milestone, but added: “It would be nice, wouldn’t it?”

The rest of the AFL universe shares that view.

‘That can be taxing’: Geary, King injured as Saints rue costly misses