Let’s never speak of NSW dynasties ever again. At the very least, until they achieve one. The only dynasty I want to talk about is the TV series Dynasty from the 1980s starring Joan Collins and Linda Evans.

Let’s forget about streaks. About golden ages. About the Blues dominating State of Origin for years to come.

Let’s stop the wild comparisons between this Blues side and those of the past. Are they better than the side from 1996? How about 2000?

Let’s stop talking about the Back Five like they’re the Jackson Five. They’ve been great. Incredible even. But they haven’t gone platinum yet, baby.

Brad Fittler has achieved so much since taking over as coach in 2018. He’s won three series from four years. Props to him.

But reports of Queensland’s death have been greatly exaggerated. Their gripping 20-18 win in Origin III, an alleged dead rubber, has surely underlined that very point. 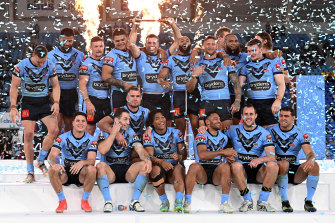 The Blues are bringing the shield back to NSW… but not a 3-0 series win.Credit:Getty

All it took was the absence of halfback Nathan Cleary to throw a sizeable spanner into the engine of this previously well-oiled point-scoring Blues machine.

All it took was the return of fullback Kalyn Ponga to bring the Maroons back to life, whether he was slipping around defenders or saving tries.

Without Cleary and his Panthers halves partner Jarome Luai, the Blues spat and spluttered around the park like a Holden Kingswood HX.

Fittler and his coaching staff considered Parramatta’s Mitchell Moses the next best option. That’s a concern if he’s the No.2.

Captain James Tedesco overplayed his hand, jumping too much into first receiver and, at times, consigning Moses to spectator. He did defend well, as Fittler pointed out in his post-match media conference.

But the Eels halfback, regrettably, looked out of his depth at this level. He may still prove us all wrong.

Apart from Cleary, the player the Blues really missed was prop Daniel Saifiti, whose charging runs on the first tackle of the set were important for the Blues in the first two matches.

This Origin marked the first time in the series Fittler has had to wrestle with injury concerns to key players. What many have forgotten amid the chest-beating is Maroons coach Paul Green has been wrestling with them from the start.

Cameron Munster and Harry Grant came into camp for the first game having spent a month on the sidelines. Grant missed the next two while Munster was uncharacteristically quiet.

Ponga was brought in, broke down at training, and it cost the Maroons any chance of having him fit for game two, as per the comments of his Newcastle coach Adam O’Brien.

AJ Brimson and Reece Walsh came in but were ruled out with injury.

For the first two matches, Queensland had no stability around the fundamental positions of fullback and hooker. That hurts any side.

They got it wrong when they picked Andrew McCullough at dummy half for game two but got it right, and spectacularly so, with Ben Hunt in game three. 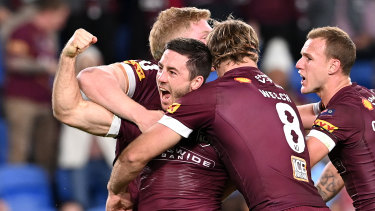 Ben Hunt scored two tries and got through a mountain of defensive work in game three.Credit:Getty

Who knows if Green is the right man for the job, but you sense Queensland are just a Wayne Bennett away from troubling NSW again.

Add Walsh and an emerging Sam Walker to that squad and they will be a far stronger force to be reckoned with in the future than some will tell you.

The emphatic manner of the Blues’ victories in the first two matches, with a combined score line of 76-6 in Queensland, helped crank up the hyperbole and comparisons.

Tom Trbojevic was being talked about as a “future Immortal” after his heroics in the series opener in Townsville. Then came the chatter about the back five being “the most potent in Origin history”.

Then came the talk of The Streak. How many could NSW claim in a row? Four? Five? Eight like the great Queensland sides from 2006 to 2013?

The chatter came from the media, former players and fans – from both sides of the border.

An hour before kick-off on Wednesday night, Mark Geyer was hosting his weekly program on Triple M when a mate fired in a text.

“This NSW side is the best ever if they win tonight,” Geyer’s mate reckoned.

What made it weird was that he was a Queenslander.

Word out of the NRL Mothership is a call will be made in two weeks about 12 relocated clubs staying put in Queensland for the remainder of the season – or coming home. 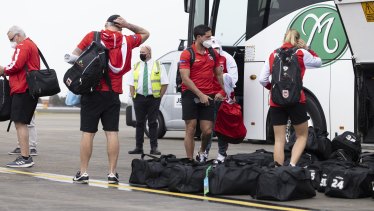 Dragons players and staff at Sydney airport during the week to board a flight to Queensland.Credit:Brook Mitchell

There are, from Friday, 79 days until the grand final and the NRL will weigh up the risk of returning to Sydney only to again flee NSW if there’s another outbreak.

The total daily case number isn’t the one head office is keeping its eye on, but community transmissions.

Relocating a dozen teams to mini “NRL cities” will cost the NRL a whopping $12 million per month.

That’s why you can bet it will sell the grand final to the highest bidder if the competition doesn’t return to Sydney, desperate to make up some of the losses.

The price is right

An amazing thing has happened this past week: I watched two games of rugby and they were entertaining.

The absolute fireball of a match between the All Blacks and Fiji in Dunedin on Saturday was absorbing and emotional with Fijian players huddled in a circle and singing the national anthem after full-time. Beautiful stuff.

Then came the crazy match between the Wallabies and France on Tuesday, with both teams chaotically throwing the ball about, often by mistake to each other.

The price tag? Forget reports it’s around $1m a year. I’m informed it’s closer to $1.5m a year, although the length of the deal is yet to be revealed.

That is jaw-dropping money that would easily make him one of the highest-paid rugby players in the world.

Koroibete once told me he was cranky he didn’t get a sling when Wests Tigers teammates named a racehorse in his honour.

I think he’s got it covered.

My beloved colleague and third-person hunter Peter FitzSimons loathes betting so I’m going to annoy him by saying he’s $1.04 in early markets to quote West Indies blaster Chris Gayle in his Saturday column.

I’m also going to annoy him by getting in first.

Fitz has a penchant for exposing sportspeople who refer to themselves in third person. After scoring 67 from just 38 balls in his side Twenty20 international victory over Australia earlier in the week, Gayle broke the world record for third-person references.

“Chris Gayle not getting the runs, soon to be 42, you guys should be happy to see Chris Gayle on the field still. Hopefully Chris will last as long as possible. Cherish those moments. Commentators, don’t put no stats about Chris Gayle not scoring a half century. Just respect the ‘Universe Boss’ playing some cricket and having some fun. Enjoy the moment with Chris Gayle.”

So there you go. Chris Gayle speaking about his favourite subject: Chris Gayle.

The quote
“It’s another entry in England’s catalogue of unfulfilled expectations.” – The incomparable football commentator Martin Tyler finds the perfect words, as always, in the aftermath of England’s penalty shootout loss to Italy in the Euro 2020 final.

There ain’t no party like an Ash Barty Party. That is all.

Thumbs down
If the IOC was having a hard time convincing the good people of Tokyo it’s OK to host a major event during a pandemic, president Thomas Bach didn’t help with this: “Our common target is a safe and secure Games. For everybody, for the athletes, for all the delegations, and most importantly also for the Chinese people … Japanese people.”

It’s a big weekend for …
The Dragons, who will shake off the COVID breach blues and rip into Manly at Cbus Super Stadium on Friday night, sans a few sacked and suspended players.

It’s an even bigger weekend for …
The 11 Australians contesting the 149th British Open at Royal St George’s Golf Club. It’s been 28 years since one has claimed the Claret Jug so it’s time they channelled their inner-Barty and got it done.

Kyle Sinckler’s Lions rollercoaster ride will be making of him, says Eddie Jones