On Thursday, Richmond coach Damien Hardwick’s anticipation at reading a series of letters Tigers midfielder Jack Ross had left on his desk was obvious as he spoke about what playing on Anzac Eve meant to his club.

They weren’t just any old letters. Ross knew the senior coach would be as intrigued by the words of his late great-grandfather Whitley Carter as he had been when he first read them.

Carter was four years younger than the now 21-year-old Ross when he left Stawell to enrol, possibly in Geelong, without the knowledge of his mother, to serve overseas in the Great War. 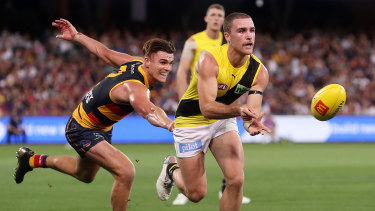 After training in Egypt, the teenager found himself in Gallipoli as events out of his control unfolded. He wrote to his parents in wonderment at his good fortune that an order halting the kamikaze sprints into a blaze of bullets had arrived just before a whistle signalled it was his turn to go over the top of the trench.

That luck amid the horror of war allowed Carter to be part of the carefully planned evacuation that took him eventually to France, where he participated in more fighting.

“He returned from Gallipoli, fought in France, was told he would not live past 30 [years old] from the trauma and shrapnel injuries, and then went on to live until he was 94,” Ross said. 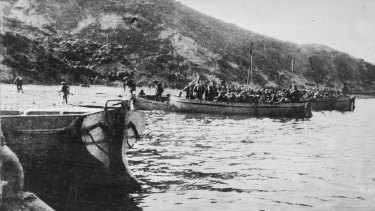 A glass plate negative of the landing at Gallipoli in 1915.Credit:Wolter Peeters

Ross has heard stories of his great-grandfather’s toughness as he grew older, such as the time he cut a few fingers off in a piece of machinery, only to pick them up and put them on ice so they could be reattached.

The family connection adds a layer to the Anzac Eve clash for Ross on Sunday as he looks to make the most of another chance to build his fledgling career at the Tigers.

“He was 17 or 18 and went and fought,” Ross said. “I could not see myself doing anything like that, so I’m full of admiration for him.

Although just his 35th match, it will be Ross’ third Anzac Eve contest as he aims to cement a spot in the midfield of a team that has won three of the previous five flags.

“He returned from Gallipoli, fought in France, was told he would not live past 30 [years old] from the trauma and shrapnel injuries, and then went on to live until he was 94.”

Ross was within an inch of being selected in the 2019 team that thrashed the Giants. He was held out of the VFL grand final as the likely replacement for the injured Jack Graham, but the Tigers sprung a surprise when they named Marlion Pickett to make his debut on the biggest stage of them all. 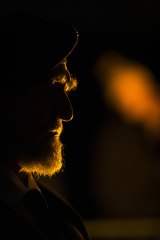 Veterans paid their respects at the Anzac Day dawn service at the Shrine of Remembrance last year.Credit:Chris Hopkins

It was an unlucky break for Ross in his first season, as it meant he played in neither the VFL nor AFL premierships, and he admits the decision hurt at the time.

Now he looks back on it as an early opportunity to learn about the realities of elite sport, and he has stuck with Richmond because he loves the place.

“It’s a pretty special club,” Ross said. “When I was drafted (pick 43 in the 2018 national draft) they had a great foundation in terms of culture and a system that works. It was just a matter of me adapting to it.”

Ross did so well that he was heroic on debut early in 2019 – before Pickett was even on their list – when brought into a depleted Tigers team that was missing Dustin Martin. He played seven games, including the final round, but he just couldn’t crack a spot in the grand final.

“I was in my first year and I had no expectations to play in a grand final, and having Marlion’s story and the character he is, he deserved it just as much as the next guy,” Ross said.

“It will stand me in good stead for hopefully a longer career at Richmond.”

Ross has fought back from adversity before, missing out on selection in the Vic Metro Under-18 team after captaining their Under-16 side, and having to fight his way through the state combine before being drafted. 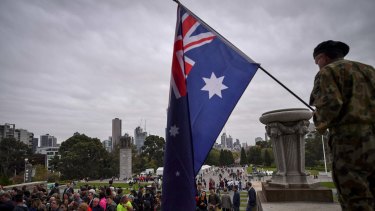 People gather at the Shrine of Remembrance in Melbourne for the Anzac Day dawn service.Credit:Eddie Jim

“I did not have the picture perfect journey to the draft and landing at a club,” Ross admitted.

He doesn’t lack motivation, and much of his immediate future will depend on his performance this season as he adapts to playing on the wing – an education that will not only make him fitter but enable him to get to stoppage after stoppage. A natural inside ball-winner, he will get his chance in that role at some point.

Right now he has his sights set on Sunday evening against the reigning premiers, where he will honour the spirit that flowed through his great-grandfather Whitley Carter and grandfather Don Ross, who died recently.

“The build up is so big, and it is a game everyone wants to play in. We are fortunate to play on Anzac Eve,” Ross said.

And after reading Ross’ forebear’s letters, triple premiership coach Hardwick will know a little more about what travels through the blood of the man wearing the Tigers’ No.5.

AFL boss flies to US for talks with media companies