Carlton great Stephen Kernahan hailed Michael Voss’ appointment as the Blues’ new coach as a “line in the sand” moment. But what the Blues now cannot do is put a line through Voss’ name as soon as the waters, inevitably, become rough.

According to sources close to the coaching sub-committee, the Blues agree that there can be no repeat of what transpired with Brendon Bolton and, more recently, David Teague, who lost support when the initial high hopes for success started to fade. 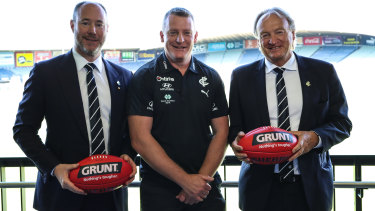 Bolton and Teague, both first-time senior coaches, had their own issues. The latter, for instance, was not strong enough with the players and did not act until too late in being bolder with his public comments, but these issues could have been handled far better than what they were.

The Blues have looked to the road maps which have played out at Richmond with Damien Hardwick and Melbourne with Simon Goodwin. The Tigers, coming off a lower base than where the Blues are now, did not make finals until Hardwick’s fourth season. But that only began three straight years of elimination final defeats, before missing September altogether in 2016. The Tigers, amid heavy political heat, stuck with Hardwick, and we know what happened from there.

The Demons’ major rebuild began under Paul Roos but they had made the finals only once in four years under Goodwin until this season. Goodwin, remember, was under intense scrutiny last summer. The Demons, like the Tigers with Hardwick, opted to make changes around Goodwin.

Bolton, who lasted less then four years, and Teague, who lasted less than three, were not given this chance. This cannot happen with Voss, who was seen as a safer pair of hands than Adam Kingsley, the sub-committee’s final cut, for he already had five years of senior coaching experience with the Lions and, according to insiders, is a far more rounded coach with an understanding of the modern generation. His man management and leadership skills, and ability to drive a high-performance culture – a failing under Teague, according to the club’s external review – are now said to be elite after an extensive stint as an assistant to Ken Hinkley at Port Adelaide. 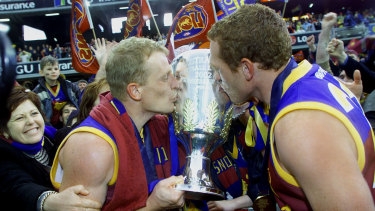 David Parkin, the Blues’ three-time premiership coach who sat on the coaching sub-committee, has a history with Voss, having been brought in to help review his position in Brisbane in 2011 – a season in which the Lions won just four games. Voss was eventually given a contract extension but the Lions’ sub-committee had tough discussions with him.

A decade on, Parkin said Voss, now 46, and in conjunction with new chief executive Brian Cook, would deliver a degree of leadership that had been missing.

“What he brings is a leadership role,” Parkin said.

“Michael will surround himself with the strategic thinking and tactical stuff that is required.”

Sources close to the Blues say they are preparing a deeper dive into analytics, and Voss’ new assistants will be named soon.

In some ways, this appointment has been almost two decades in the making.

Under then president Kernahan, the Blues wanted Voss to come on board as an assistant coach after his playing retirement in 2006. But the three-time Lions premiership skipper had a year as a television commentator and then as an assistant with the West Coast Eagles, before replacing Leigh Matthews in Brisbane. He had also been in the running for the Blues’ top job in 2019, only to be left in the lurch in a process which was said to have been half-cocked and too reliant on player and past player feedback.

“Ah, no,” Voss would only say when asked whether that experience under a different Blues regime had made him think twice before joining the latest process.

His links to Princes Park include the good – he grew up as a Blues supporter idolising Wayne Johnston and Ken Hunter – and the questionable, having agreed to take Brendan Fevola off the Blues’ hands in 2010, only for Fevola to last one year in Brisbane before more off-field controversy.

Kernahan says there is an “aura” about Voss and, in a nod to the sub-committee’s thinking, says the Blues should now settle “for the next 10 years”.

“Our players will get behind Michael Voss and I can’t wait to see that because it’s a line in the sand day for the club,” he said.

For the Blues’ faithful, enduring the longest premiership drought in club history, it’s a message they hope is heeded under the new management of Cook and president Luke Sayers.

My Rugby Championship team of the tournament highlights Wallabies’ progress