Brisbane have emerged as the latest club to show interest in Joe Daniher, with the Lions closely monitoring the progress of the injured Essendon star.

While Brisbane haven't formally approached Daniher or Essendon, club sources have confirmed they will wait to see if the forward plays any football in 2020 before deciding whether to pursue him in the trade period. 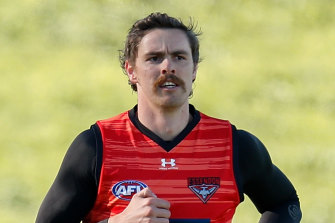 Daniher is a restricted free agent, meaning Essendon can match a contract offer and force a trade.

The Bombers are yet to offer Daniher a contract extension. They, too, are waiting to see what transpires if and when he returns from injury.

The Lions do have a link with Daniher. The club's head of medical, Peter Blanch, was at Essendon in 2017, the year Daniher was All-Australian and won the club's best-and-fairest.

Despite being a genuine premiership contender this season, Brisbane still require a bona fide power forward.

Eric Hipwood – contracted until the end of 2023 – showed his talent on Saturday when he booted five goals in a match-winning display against the Western Bulldogs. Before that, he'd kicked 11 goals in 10 games.

Daniel McStay – who the club is very happy with and who is contracted until the end of 2022 – has only kicked seven goals from nine games this season.

Daniher was making positive strides with his recovery from his debilitating groin injuries until the middle of July, when he suffered a setback in the form of a calf injury.

He has since returned to running and Essendon remain confident he will play some senior football this season.

Daniher was denied a trade request to Sydney at the end of last season, despite the Swans offering more than a top 10 pick as a trade.

Had the trade gone through, Sydney were also prepared to offer Daniher a long-term deal with a significant pay packet.

If Daniher isn't able to play much football between now and the end of the season, his value will plummet.

While the Bombers will have the power to match any offer for the forward, Essendon would have to weigh up the benefits of trying to hold onto a player who has twice tried to leave.

He's managed only 11 games since the start of 2018, but averaged nearly 50 goals a year in the three previous seasons.

Luring Daniher would be yet another feather in the cap of the Lions, who have gone from cellar-dwellers to a destination club in three years.

Some players privately refer to the "Noble Effect": the power that football boss David Noble has when poaching star players from rival clubs.

His existing relationship with Charlie Cameron from Adelaide helped in the trade with the Crows, but Noble is seen internally as being responsible for landing Lachie Neale and Luke Hodge.

It wasn't too long ago that Brisbane couldn't hold onto their local talent. Now – in the case of Neale – they're recruiting South Australians playing in Western Australia.

Essendon chose not to comment on Daniher's situation when contacted by The Age.