Having parted ways with his management company ESP after his clandestine move from St Kilda to Fremantle almost 10 years ago to the week, Ross Lyon has eschewed the conventional model of being handled by one of the major AFL talent firms.

These days, the closest person he has to a public agent is his long-time lawyer, friend and confidant John Gdanski, the former Saints director who was on the board both when Lyon came to, and left the club. 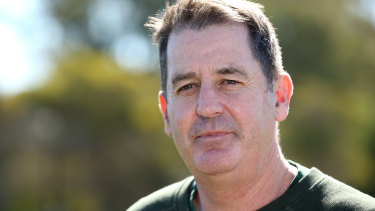 So, it was intriguing, then, that on the day David Teague’s sacking from Carlton was finally confirmed and Lyon installed as a short-priced favourite to be his successor, Gdanski’s only public comment about what had transpired at the Blues, and what might come next, was to cast doubt about whether the job was overly appetising.

“In my experience it would make it very difficult for any coach to look at the Carlton job and be satisfied that there is long-term security there,” Gdanski told The Age.

Recent history suggests that is a fair assessment.

Blues president Luke Sayers cannot be blamed for sacking Brett Ratten and appointing Mick Malthouse at the end of the 2012 season; Sayers joined the board a few weeks after Malthouse was signed.

But in the nine years since, Sayers has been a director when Malthouse was sacked, and when two coaches – Brendon Bolton and then Teague – were hired and fired.

Asked on Thursday about a largely wretched decade on-field, Sayers did not abrogate his responsibility for the club’s failings during his time on the board.

However, while the 2021 coaching panel has largely been wiped out by the Blues’ football department review, and almost half the board is turning over at the same time, Sayers has made it clear this is no rebuild. 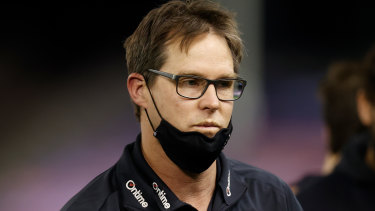 Indeed, it was the gulf between expectation and performance that ultimately did Teague in.

The Blues, having signed Mitch McGovern, Zac Williams, Adam Saad and Jack Martin to lucrative and long-term deals over the past 36 months, believed they were ready to make the top eight. And Sayers was emphatic that would be the expectation in 2022 for whoever replaces Teague.

“In my experience it would make it very difficult for any coach to look at the Carlton job and be satisfied that there is long-term security there.”

Sayers also said it was impossible to say how long a new coach would be given to make it in the new role before they too were shown the door.

Which brings us to Gdanski’s remark, and Lyon’s prospects for the job.

Lyon has settled comfortably into the media, which complements his work in the property sector.

But he also has at least something of an itch to scratch from a coaching perspective, judging by recent comments in which he says a fire was stoked by a conversation with Leigh Matthews.

Having taken the Saints and Dockers into premiership contention inside three seasons at both clubs, Lyon is clearly as suitable a contender as there is if the Blues – and they say they do – believe their list is ripe.

He ticks just about every box outlined by Sayers: experienced, known for hard standards, and a clear and defence-oriented game plan. 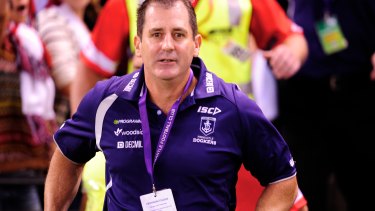 The elephant in the room is the still largely unexplained events that led to a confidential settlement involving a one-time Fremantle female staffer over an incident involving Lyon, revealed by The Age in 2018.

Reports had emerged over the past week that the Blues’ board was split over Lyon’s suitability, given the club’s Carlton Respects program.

“I’m disappointed at the timing of it.

“But what I can say is, and I said at the time when I addressed things in Fremantle, the duress and the hurt that a lot of parties were feeling, I felt terrible.

“I need to say this; there was a respectful and confidential resolution reached and designed to protect all parties.

“The reason it’s respectful as well is because it is confidential. My intention is to respect that and not comment any further.”

The idea of an agenda to call into question Lyon’s reputation is clearly an explosive suggestion. Certainly, some industry insiders are receptive to the notion. That Lyon’s close friend Stephen Silvagni left the Blues acrimoniously less than two years ago does nothing to douse the fire.

For his part, Teague, strung along for at least a few days longer than expected and probably necessary, would not speak publicly on Thursday. Both he and his manager Liam Pickering had made it clear over the past fortnight that they believed the coach had been cruelly left in the lurch since Carlton confirmed The Age’s revelation of a review mid-season.

Just how rocky Teague’s relationship with a core group of players had become depends on whom you ask.

Sayers and chief executive Cain Liddle would not disclose what proportion of the Carlton list had lost faith in the 2004 Blues best and fairest.

Yet, Liddle was adamant that the outgoing coach and co-captain Patrick Cripps had “a very good relationship”, despite criticism of Cripps over the past week from both Teague and Pickering.

The view of some close to Teague is that he was done a disservice by interference from the board in football matters, and that the treatment he received had been akin to bullying.

Whether you agree with that assessment is again probably shaped by where your loyalties lie.

But at the heart of the matter is that Carlton’s powerbrokers don’t want to wait any longer than necessary for success. For so long a powerhouse, the Blues have gone 26 years without a premiership and have five wooden spoons in 20 years. The impatience index is compounding annually, and there will be little or no less pressure on the next person into the hot seat than there was on Teague. Does Lyon need the stress?