Home » Rugby » ‘Magic Round’ an ideal way to cut the length of pre-season, says Cats chief

Geelong chief executive Steve Hocking says the AFL’s pre-season is too long and players will welcome the chance to add an extra home-and-away round next year.

Clubs expect the AFL will introduce a “Magic Round”, injecting a 23rd home-and-away match, meaning the season runs for 24 weeks for the first time, but the league will guard against heightened player workloads by lopping pre-season games.

The Magic Round concept will have all nine games played in one state, with NSW and South Australia already bidding for the right to host. Bids are expected to be more than $10 million, providing a cash injection of about $500,000 for each club. 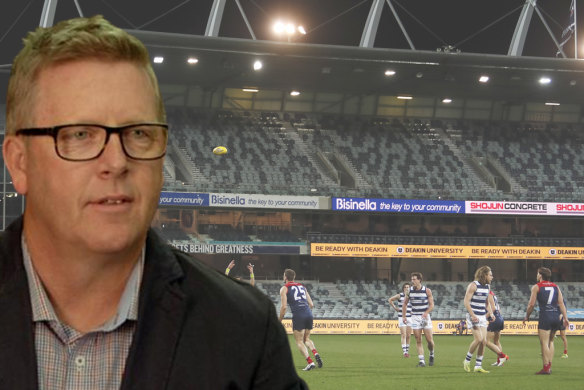 Hocking, a former Cats player and league operations chief, said the round was expected to be held in the second week of the April school holidays, giving families the chance to attend more games. Double and triple headers have been mooted.

“I don’t have a preference (where it’s held), other than I think it’s fantastic to take nine games to a state. Wherever it lands, good luck to that state. But it’s great for football,” Hocking said on Friday, launching the Cats’ 2022 premiership cup tour.

“My understanding is there will be less pre-season, and I am not quite sure why pre-season has gone for as long as it has, I think players want to play. And if you are going to play, you want to play in actual premiership games.

“I think it’s fantastic for the fans. My understanding is it’s going to land in the second week of the school holidays which means young people, young kids, get to connect with the game. When you take over a state, that’s unbelievably good for football.”

The AFL is working through a host of logical issues, including ticketing and sponsorship. League executives understand there are benefits in taking the round to a non-traditional football state, but greater attendances are more likely in South Australia.

Players, fearing injury, have long complained the pre-season, that being the blocks of training and practice matches that begin in November-December and run until early March, are too long, with an extended home-and-away season preferable. Cats premiership star Patrick Dangerfield, also the AFL Players Association president, has even said players could back a 34-week season, provided the length of quarters were cut.

The added round also works into growing support for a fifth interchange player who can be used at any stage of the game. The AFL has surveyed clubs, and the commission last week addressed the issue. The two other options are retaining the status quo, that being a four-man bench with an added medical substitute; or return to the model used between seasons 2011 and 2015, but this time with four men plus a substitute, with the latter to be used at any time for any reason.

Under Hocking’s watch, the league introduced the medical substitute on the eve of the 2021 season, primarily to ease the workload when a player was concussed and subbed off, but he said had no preference as to what should be done now.

Hocking confirmed the Cats are still hopeful of having Daisy Pearce join their coaching staff soon. Pearce, Melbourne’s AFLW captain and a lead expert comments caller on Seven’s Friday night men’s coverage, is keen to pursue a coaching career, having been a part of the AFL’s Women’s Coach Acceleration Program.

The Cats had approached Pearce earlier this year, but Pearce, 34, opted to play another season in the hope of winning an elusive premiership. The Demons, second on the ladder heading into the final home-and-away round, are well-placed to achieve that hope. “But, hopefully, we can add Daisy in the new year,” Hocking said. 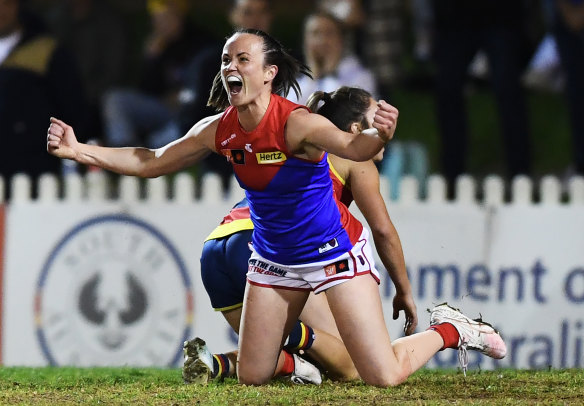 The Cats hope AFLW star Daisy Pearce will join their coaching staff through the pre-season.Credit:Getty Images

Tom Hawkins had surgery on his injured foot in Brisbane on Thursday, with the veteran forward likely to miss the opening rounds of 2023. Hocking said should Hawkins be unavailable, it would give Esava Ratugolea and youngster Shannon Neale an opportunity. Ratugolea failed in his recent bid to be traded to Port Adelaide, while West Australian Neale, who managed only one senior game this year, was given a one-year contract extension.

“Tom is an absolute pro. He is just getting better the longer he goes, so it will be a delayed start to the season – but that’s okay,” Hocking said.

Meanwhile, the AFL is still awaiting clarity on whether a new state-of-the-art stadium will be built in Hobart before it agrees to Tasmania’s bid for the league’s 19th licence. A spokeswoman for infrastructure minister Catherine King told The Age on Friday that until plans for a new stadium were submitted, the government could not make a call on whether it would provide funding.

The AFL maintains a new stadium is essential for Tasmania’s bid for a standalone team to be successful – but just where the funding is derived remains at the crux of the delay.

Tasmanian Premier Jeremy Rockliff wants to build the $750 million, 23,000-seat capacity stadium on Hobart’s waterfront at Macquarie Point, but his party is divided. The Liberal government says it will only fund half of the cost.

The state Labor opposition this week said it opposed the development, declaring in a press release that “we already have two perfectly good AFL stadiums and a new stadium was never included in the AFL taskforce business case for a Tassie team”.

The delay in the process, also frustrating the 18 clubs, is one reason why AFL chief executive Gillon McLachlan has extended his departure date.

Elsewhere, Western Bulldogs defender Taylor Duryea has signed a one-year contract extension. A dual premiership player with Hawthorn, Duryea will head into his 11th season as one man the Dogs need to help the club rebound from a disappointing season when they limped into the finals. Duryea managed 12 games this season, having had a knee issue.