Collingwood forward Josh Thomas would be more than willing to enter a quarantine hub in order to play AFL in 2020, although he expects that having no children makes the decision easier for him than it might be for his peers.

However, the 28-year-old is adamant that players need to be prepared to take the extra step wherever possible to get the season up and running to provide entertainment for supporters and bring revenue into the game to support clubs. 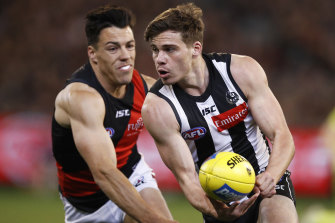 Collingwood forward Josh Thomas would have no problems playing in a quarantine hub, but knows circumstances may be challenging for other players.Credit:Getty Images

"It's one of those things where as a player we said we would do whatever it takes. It's not going to be ideal in many ways but it's a pretty serious situation that everyone is in so I think when you say that you will do whatever it takes you have got to go and actually action that as well," Thomas said.

The 28-year-old, who is contracted until the end of 2021 and is studying during the shutdown, recognises he is more able than others to pick everything up and go into a hub.

"Everyone is going to have different situations so for me it is pretty easy: I don't have kids. I already live interstate. I just live with my fiancee," Thomas said.

"It would be challenging, but it would not be the end of the world. If it meant getting footy on track I would be more than willing."

Although Victoria’s chief medical officer Professor Brett Sutton indicated it’s unlikely crowds will be able to attend games in 2020, the AFL remains confident they can develop a return-to-play program that would see games played while protecting player safety without placing an extra burden on the public health system.

The AFL is looking at how each state's coronavirus-related restrictions would affect their ability to stage games and move teams across borders and also following government advice on what access they may have to equipment that would allow them to test for COVID-19.

Playing games at Victorian venues Marvel Stadium and the MCG are among the options being considered, along with south-east Queensland and Perth, with clubs of the view the AFL are trying to devise ways games would be played that caused minimal disruption to players and staff.

A football managers meeting scheduled for this week was cancelled meaning the clubs were still awaiting detail about the hubs.

However club sources suggested there was a chance increased protocols could see players competing in their home states, then able to stay at home and practise social distancing measures rather than go into a motel, while clubs visiting from interstate would stay in accommodation with strict quarantine measures in place.

Breaks between games may be reduced while there is also a chance for double-headers and games played every night of the week as the AFL attempts to play the remaining 144 games plus finals.

The MCG is awaiting a decision from the AFL as to how often the venue will be used for games without crowds with the venue ready to swing into operation if needed, while the AFL owns Marvel Stadium.