Home » Rugby » Majestic Cats batter the Bombers at the Gabba

A rampant Geelong all but dumped an insipid Essendon out of the finals race as they embarrassed the Bombers with a 66-point romp at the Gabba yesterday.

The Cats ominously purred on all cylinders in an utterly dominant first half as they took a 59-point buffer into the main break to send a message to the rest of the AFL that they want to be back at the same venue on October 24. 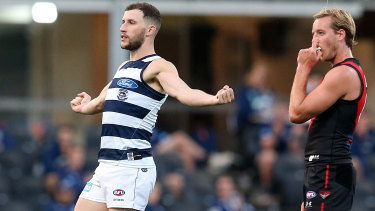 The Bombers are still a mathematical chance of squeezing into the top eight with two wins and GWS losing their last three matches. The Giants play Adelaide on Tuesday night.

But realistically, the Bombers are as cooked as a sausage at a Father’s Day BBQ. They do not deserve to be in the finals based on the pathetic effort in the first half in Brisbane yesterday.

Geelong kicked six goals in the opening quarter to take a 30-point cushion into the first change. They kicked another six majors in the second term while all the Bombers could manage was two goals for the half.

The Cats’ halftime total of 12.3 (75) was the biggest first half total of the season in one of the most one-sided opening halves of 2020. The margin got to 65 points before Jake Stringer kicked a goal after the siren for the Bombers. 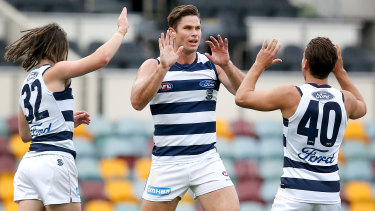 It was like a father-son game. The Cats did as they wanted, when they wanted as Essendon’s horrid history of poor first quarters in 2020 rolled on. The Bombers have not won an opening term since Round 2.

Geelong moved the ball up the field almost effortlessly. One goal came from a beautiful sweeping movement that included Hawkins picking up the ball on the half volley and quickly handballing to a teammate with Menegola eventually finishing off with the goal.

Essendon were simply blown off the Gabba by a team that was up for the contest and several classes above. Shamefully for the Bombers, the difference in intensity between the teams was as wide as the Grand Canyon. 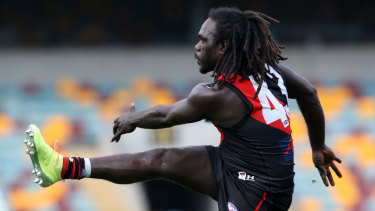 The rot set in very early. Anthony McDonald-Tipungwuti butchered a certain goal when he played on with a quick but wayward handball to Irving Mosquito. The Cats then marched the Sherrin up the other end and kicked a goal through Mark Blicavs.

Cale Hooker then missed a sitter for the Bombers and the Cats responded quickly with a goal to Gary Rowan.

It was all blue-and-white hoops after that as Geelong warmed up nicely for this Friday’s blockbuster against Richmond at Metricon Stadium.

The Bombers showed some fight after halftime but it was too little, far too late. Geelong had already well and truly banked the four premiership points and increased their lead to 62 points as an injured Mosquito was taken from the field with a knee injury.

NO LUCK FOR THE IRISH
Irishman Zach Tuohy was a late withdrawal from what would have been his 200th senior match. After getting smashed in the rib cage in last Friday’s win over the Bulldogs, Tuohy was subjected to a fitness test on the Gabba in front of senior coach Chris Scott and a number of support staff. After some contested marking drills and a serious chat, Tuohy was ruled out.

FEELING THE HURT
Injury was added to considerable insult for the Bombers as Irving Mosquito was taken from the field at the last break with a suspected knee injury. 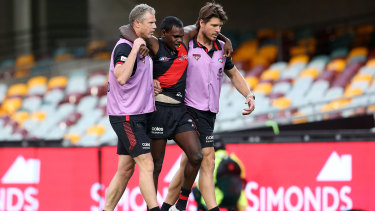 Cats defender Tom Stewart stepped around the Bombers livewire who crashed awkwardly to the Gabba turf and needed to be carried off the ground by two Essendon support staff.

He cut a forlorn figure on the bench in the fourth quarter accompanied by crutches and a knee brace.