The Maroons have claimed back-to-back women’s State of Origin thanks to a late penalty in the final two minutes which saw Queensland take victory 8-6 at Sunshine Coast Stadium.

In the pouring rain on Friday night, both teams were locked in at 6-6 with just two minutes. But a ruck infringement in the 68th minute gave the Maroons a penalty kick to take the final two points and the silverware. 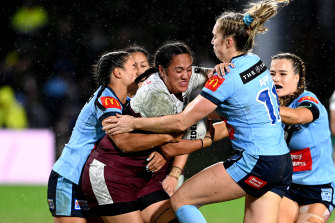 Tazmin Gray was player of the match and was a constant menace for the NSW defence.Credit:Getty

Despite the incident, Brigginshaw steered her squad around the park and lifted her team right at the end to get them over the line.

Blues centre Isabelle Kelly starred for NSW and looked as if she was back to her 2018 Dally M form.

Sadly, the same couldn’t be said about Maddie Studdon.

Last year, Blues coach Andy Patmore made waves when he dropped Studdon. Despite the 26-year-old winning the Nellie Doherty player of the match medal in 2019, Patmore was unimpressed with her NRLW season and left her out of the Origin squad.

This year, Hilder put her back into the No. 7 jersey, but her performance on Friday night was a poor one, with her hands letting her down on a number of occasions.

Despite ultimately losing the game, the Blues started the match the better of the two sides.

In just the fourth minute, Isabelle Kelly took a near-perfect pass from Botille Vette-Welsh to reach her arm through a pack of defenders and plant the ball over the line.

Queensland made their way back into the contest and in the 23rd minute, 18-year-old hooker Destiny Brill managed to get down low enough to dive between the NSW defenders Apps and Vette-Welsh to give Queensland a 6-4 lead at half-time.

It was a moment Reece Walsh, the Queensland men’s own teenage debutant, should have been watching.

With defence winning the day at the start of the second half, NSW were only too happy to kick for goal from a penalty to even the scores at 6-6 after 52 minutes.

As NSW were frustrated by several mistakes they made with the ball, they were given a lifeline as Queensland were denied a try just five minutes out from the final buzzer.

Despite Tamika Upton going over the line in style the bunker ruled there had been an obstruction in the lead up and the cgame appeared destined to head to golden point.

However, just a few minutes later Queensland were pushing hard for a match-winning try when they were awarded a penalty less than 10 metres out and Lauren Brown held her nerve to seal the win.

Even before the sides ran onto the paddock the game had already made history by having Tahnee Norris and Kylie Hilder as head coaches, marking the first women’s State of Origin coached by two women.