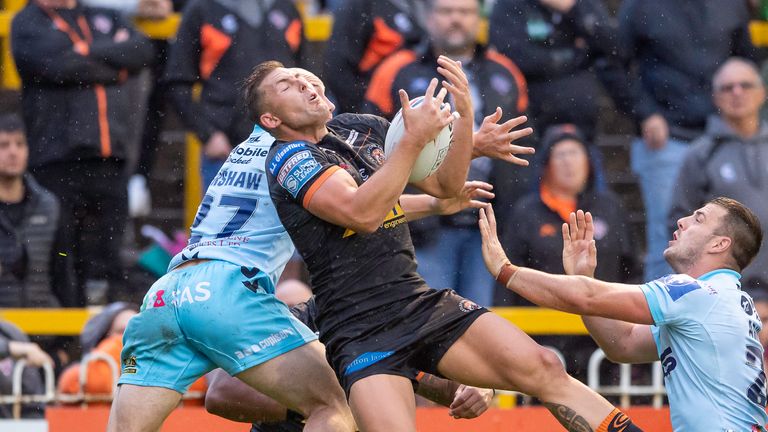 Castleford edged Wakefield 23-18 to extend their winning run over their
neighbours to 16 games, continuing an unbeaten streak that goes back to 2015.

Castleford edged Wakefield 23-18 to extend their winning run over their neighbours to 16 games, continuing an unbeaten streak that goes back to 2015.

A brace from Greg Eden ensured the Tigers triumphed over their derby rivals and clinched a third Super League victory in a row, keeping them in the hunt for a potential play-off place.

Tries for Oliver Holmes and Derrell Olpherts, along with four goals from Danny Richardson, cemented Castleford’s tense derby win at the Jungle.

The Tigers started the game positively and Paul McShane tried to barge over the line in the fourth minute, but Wakefield held him up to prevent a try.

They continued to turn the screws and heap more pressure on Trinity’s defence, which paid off after eight minutes when a quick shift to the left saw Eden touch down for the opening try. Richardson added the extras from the sideline.

It took just three minutes for the Tigers to grab their second try through Holmes. A smart pass from Richardson was enough for the forward power over from short range, with the half-back converting to make it 12-0.

But Trinity soon managed to cut the deficit thanks to brilliant thinking by Brad Walker. The hooker deftly grubbered into the in-goal and Tinirau Arona won the race to the ball to score, with Mason Lino adding the extras. In the 27th minute the Tigers edged two more points ahead, with Richardson kicking a penalty goal after Wakefield were pinged for offside.

Then tempers flared when Richardson and Lino squared off at the ruck and a melee erupted. Both players were subsequently yellow-carded and sent to the sin-bin, leaving each team with 12 men.

It was Castleford who responded better to the incident, with Niall Evalds putting Olpherts over for a try in the corner with a brilliant cut-out pass.

With Richardson still in the bin, Gareth O’Brien took up the kicking duties but his strike was wayward.

Right before half-time, Richardson knocked over a drop goal to give the home team a 19-6 lead at the break. 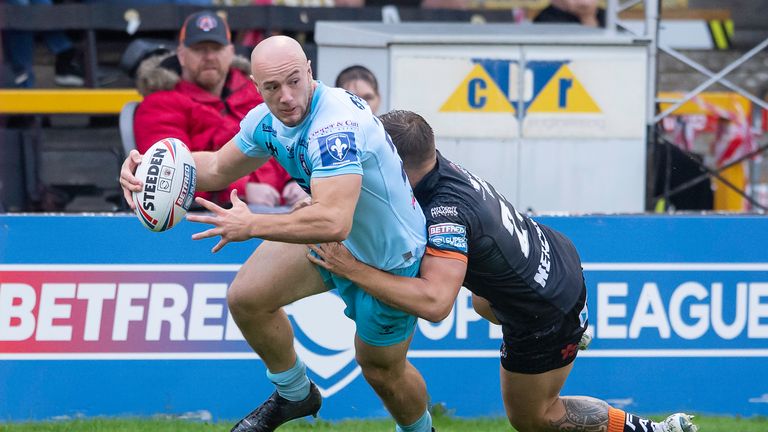 In the second half Castleford turned the screws and in the 48th minute Eden grabbed his second of the night. Richardson’s kick was wide, but the Tigers remained comfortable with a 23-6 lead.

Tom Johnstone gave Trinity some hope when he forced his way over to score with 19 minutes left. Lino added the extras to cut Castleford’s lead to 23-12.

Then with five minutes left on the clock Lee Kershaw crossed out wide and Lino nailed the conversion to reduce the deficit to five points.

But Wakefield were unable to fashion another late try and the Tigers held on to clinch victory.