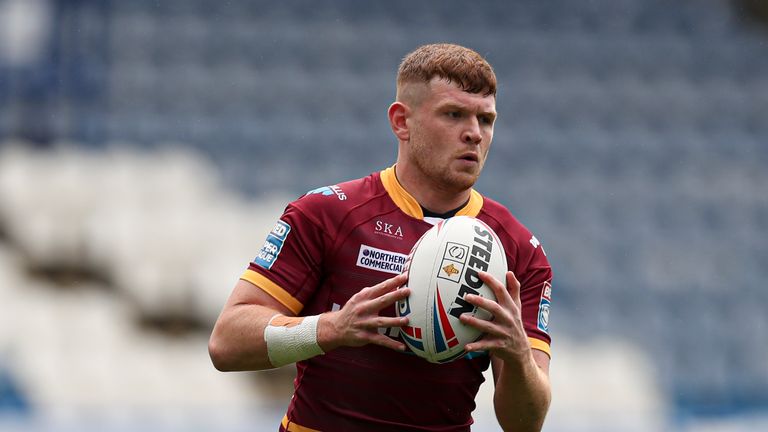 Young half-backs Oliver Russell and Will Pryce guided Huddersfield to a comprehensive 40-28 win that dented the Super League play-off hopes of Hull KR.

Russell scored one try and had a hand or foot in six others, while Pryce contributed 16 points with a try and six goals as the Giants halted their three-match losing run in style.

A third successive defeat leaves the Robins still sweating over a top-six finish as they failed to take advantage of defeats for play-off rivals Leeds, Castleford and Hull earlier in the day.

Half-back Mikey Lewis gave the visitors the perfect start, showing his strength to force his way over for a seventh-minute try after the Giants defence was caught out by a bouncing ball, but his opposite number Russell was quickly into the action.

Russell struck for an equaliser, punishing Rovers winger Greg Minikin’s inability to gather his grubber kick to score his side’s first try and then ran the ball on the last tackle to get second rower Josh Jones charging through a gap for the second.

Russell failed to convert his own try but Pryce had more joy in adding to Jones’ effort to stretch Huddersfield’s lead to 10-4.

Hull KR substitute Muizz Mustapha had a try disallowed for a double movement, but the Giants failed to find touch from the penalty and the visitors took full advantage as second rower Kane Linnett took Jez Litten’s short pass to crash over for his side’s second try.

Russell then took centre stage once more, producing a superb cut-out pass for centre Ricky Leutele to score Huddersfield’s third try and combining with him to get winger Sam Wood over for another.

Pryce kicked his third conversion to make it 22-8 before Hull KR forward Matt Storton’s ball steal on Nathaniel Peteru created the position for full-back Ben Crooks to get Minikin over for a try in the last act of the first half.

Unfortunately for the Robins, Crooks was unable to convert any of his side’s three tries as they trailed by 10 points at the break.

It was four tries apiece early in the second half after former England winger Ryan Hall plucked the ball out of the air following Lewis’ high kick to score his 14th try of the season, but Rowan Milnes’ unsuccessful conversion attempt left Rovers still trailing by six points.

Huddersfield doubled their lead on 52 minutes when Pryce raced on to Russell’s kick over the defence to claim their fifth try and the former added the conversion.

Hull KR produced one last effort to stay in the game but Minikin put a foot in touch before he dived over at the corner, and hooker Matt Parcell was held up over the line as the home side scrambled to keep control of the game.

Huddersfield were more clinical and they pounced for another score when Crooks fumbled Russell’s grubber kick to gift a try to forward Joe Greenwood, while former Hull KR forward Peteru proved unstoppable from 10 metres out as he charged over for their seventh try.

In a late rally by the visitors, Linnett forced his way over from close range for his second try and Parcell finished off a break by Litten for their sixth try, with Milnes adding both conversions.

Hawkins is the Cat who wants the cream

‘Everyone gave it a good crack’: Fuller philosophical over ARLC job call