St Kilda coach Brett Ratten remains hopeful Paddy McCartin will be cleared to return to the AFL fold at some point, with the former No.1 draft pick showing improved health in recent weeks.

McCartin, who has suffered eight concussions since 2014, was delisted late last year as part of a plan to put his career on hold until at least 2021. 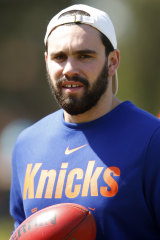 McCartin continued part-time training with the Saints during the pre-season before the AFL was forced into shutdown mode because of the coronavirus pandemic.

He was at the club's Moorabbin base at least once a week, involved in team meetings and completed gym sessions.

Rattan said the key forward was still treated as a player on the club's list.

"It's great for him to be able to interact with the players," Ratten said. "He's a great person and we want the best for him. If that news has come through in the last few weeks then that's brilliant for him. We've always said if there's an opportunity to get him back we'll look at that, but he'll need to be ticked off before we make those [decisions]."

Ratten stressed any move for McCartin to return to football would require the appropriate medical clearances.

"You've got to have all the evidence in front of you with the specialists and the doctors to make that assessment and that's not for me to make that call," Ratten said.

"Our doctor's a ripper and he'll make those calls, but whatever is best for Paddy.

"He'll have to make that decision, if he's been given the all-clear, to keep pursuing an AFL career and does he want to keep playing football.

"That's the next question after getting the all-clear, so there's a fair bit of water to go under the bridge there, but it is positive for Paddy if that's the case.

"If he was right and the doctors ticked it off then we really consider him coming back to the club but there's still a lot of work to be done in that space."