Home » Rugby » Mihocek back for Magpies, Blues select Dow, Polec out of favour at Roos

Collingwood have made five changes for their crucial clash with Carlton on Sunday, recalling Jaidyn Stephenson and Brody Mihocek.

Meanwhile, the Blues have selected Paddy Dow for his first match since round one and North Melbourne have elected to leave out Jared Polec, again, this time for their game against the Gold Coast.

Along with Mihocek returning from concussion and Stephenson back from another spell in the reserves, the Pies have selected Callum Brown, Isaac Quaynor and Tyler Brown. 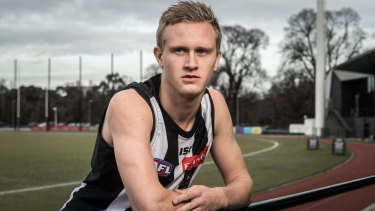 Quaynor was injured in the loss to Sydney during the footy frenzy, suffering a nasty gash to his shin courtesy of an opponent's studs.

Steele Sidebottom has gone back to Melbourne for the birth of his child, Levi Greenwood has been managed and Flynn Appleby (hamstring) is out injured. Travis Varcoe and Trey Ruscoe were both dropped.

The Blues have selected Cameron Polson alongside Dow as an inclusion, with Matthew Cottrell and Sam Petrevski-Seton both managed.

Collingwood sit seventh on the ladder with a tough run home, the Blues eight points behind them in 11th position. 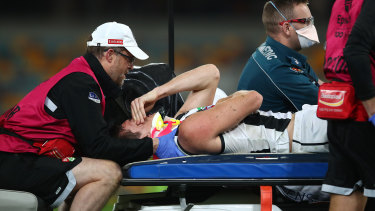 Brody Mihocek was taken from the field during Collingwood’s clash against the Demons. Credit:Getty Images

Meanwhile, Polec remains out of favour at North Melbourne. He was overlooked in favour of Aaron Hall and Majak Daw.

Jack Mahony and Tristan Xerri are both injured. The Suns have selected Alex Sexton and Darcy McPherson to replace the injured Jarrod Harbrow and the rested Sean Lemmens.

North Melbourne coach Rhyce Shaw would not discuss Polec's future at the club on Saturday, only to say he had three years remaining on his contract following a big money move from Port Adelaide after the 2018 season. 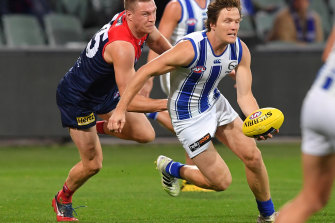 Jared Polec has been left out of North’s side. Credit:Getty Images

"He will certainly be in the selection frame next week.

"By all reports … he did a really good job and that's really pleasing from my perspective.

"We've had our chats over the past few weeks.

"He is obviously frustrated and so am I and so is the team and the club [about] the position we're in.

"We have made decisions along the way that we think is in the best interests of our footy team.