Brownlow medallist Tom Mitchell is set to win his race against time to be ready for round one with Hawthorn declaring the midfielder fit to take on Essendon on Saturday night following an off-season shoulder reconstruction.

But key playmaker Chad Wingard is unlikely to play before the Easter Monday date with Geelong at the earliest as he recovers from a calf strain. 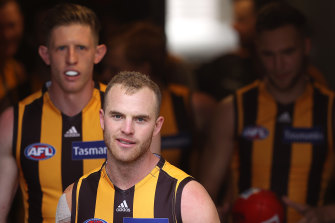 Tom Mitchell is fit to return for the Hawks in round one.Credit:Getty Images

Mitchell didn’t play in the AAMI Series game against North Melbourne at Arden Street but looks to have timed his run well enough to take on the Bombers at Marvel Stadium.

“Tommy’s had a really good block of training since we returned in January,” Hawks physical performance manager Luke Boyd said on the club’s website on Tuesday.

“Although not in the skills program, he’s been running and getting some really good conditioning work in.

“He full-trained last week, and got through that really well, so Tom will be available to play.

“It’s exciting to have one of our leaders back out there for round one.”

Boyd said Wingard was making steady progress but that he would need to build up his training loads before returning in round three at the earliest.

“Chad’s been back running for two weeks now and progressing well,” said Boyd.

“The plan from here is to intro back into some skill work from next week and then build him up over the next couple of weeks after that. So we expect him to miss a couple of games, but although that’s disappointing he doesn’t get to play round one, the main goal for us is to make sure that Chad, when he is ready, he’s ready to go.”

Jack Scrimshaw (knee) and Mitch Lewis (back spasms) have both been declared available. Jack Gunston (back) is still listed as six to seven weeks away from returning. James Sicily remains an indefinite proposition as he works his way back from a knee reconstruction.

Hawthorn coach Alastair Clarkson revealed on SEN on Monday that the Hawks were likely to name two to three debutants against the Bombers. Forwards Jacob Koschitzke and Tyler Brockman are both poised to be selected after starring against the Kangaroos. Draftee wingman Connor Downie is also in the frame while mature-age recruits Tom Phillips and Kyle Hartigan should both line up against the Dons.