David Nofoaluma is adamant Latrell Mitchell’s controversial four-week suspension was completely warranted, adding that the Rabbitohs star should have also been sin binned for his high contact on the Tigers winger.

Mitchell was banned by the NRL judiciary last week after failing to have his grade-two dangerous contact charge downgraded. 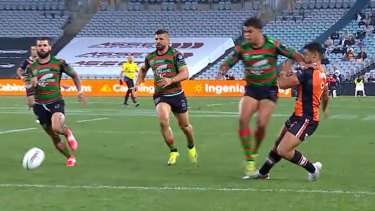 Mitchell was put on report for the high tackle, but was not sent to the sin bin. Mitchell was not penalised for two separate incidents during the game, for which he was later fined.

Asked if he believed four weeks on the sidelines was warranted for the high shot, Nofoaluma said: “Yeah, of course it was.”

“I’ll take him in the bin for 10 and I’ll take away the four weeks, I would have been happy with that,” Nofoaluma said on Wednesday. “Because he made a break literally under 10 minutes later … and it changed the game. It would have made a difference.” 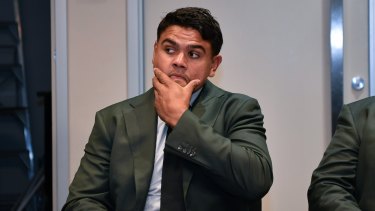 The game ended with Tom Burgess as the unlikely hero, crossing the tryline to give South Sydney an 18-14 golden-point victory over the Tigers.

Nofoaluma said he believed any player put on report should be put in the sin bin.

“In that instance, I think the referee on the day made the wrong decision and that was unfortunate for us,” Nofoaluma said.

“It would be tough to be a referee … so I can’t be too harsh on them.”

“I’m sure that they’re onto things, but if they’re not, they should be because it plays a big part in players physical health,” Nofoaluma said about not sin binning Mitchell for the high shot.

“I hope going forward that they look at it more closely.”

On Monday, NRL head of football Graham Annesley made an impassioned plea to players to stop dangerous contact with the head or neck, warning the game will break suspension records this year if things did not change.

It came as Annesley described a “disturbing” trend in the number of players being charged by the match review committee for illegal acts involving contact with the head.

The comments came after Rabbitohs coach Wayne Bennett and others criticised the NRL judiciary system for the four-week ban for Mitchell.

As a result, NRL chief executive Andrew Abdo released a statement on Monday defending the integrity of the people who serve on the independent match review committee and judiciary panel.