Collingwood star Darcy Moore has given the Magpies a shot of good news, declaring he has escaped structural damage and a season-ending knee reconstruction.

Moore took to social media on Monday to provide a critical update on the knee he hyperextended when landing in a marking contest against the Gold Coast Suns on Saturday night.

There had been fears he had suffered damage to his anterior cruciate ligament, which would have led to a knee reconstruction and a year on the sidelines. 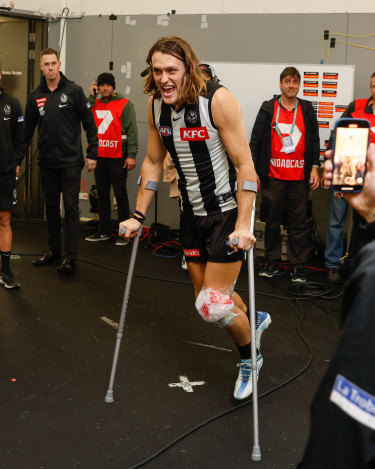 Darcy Moore was on crutches after the win over the Gold Coast Suns but revealed on Monday he had escaped structural damage.Credit:AFL Photos

“There is no structural damage to my knee which is big,” Moore said.

“Thank you to everyone for the messages of support. It’s truly overwhelming and much appreciated.”

However, Moore does have a hyperextension and bone bruising, and could still miss up to six weeks. But this means he is likely to return in time for the finals.

The Magpies have leapt to sixth on the ladder after a come-from-behind, five-point win over the Suns at Metricon Stadium. They host North Melbourne at the MCG on Saturday, and appear well-placed to make the finals in Craig McRae’s first year as senior coach.

The Tigers are also sweating on scans: Dustin Martin was subbed off with “hamstring awareness” in the win over the West Coast Eagles on Sunday.